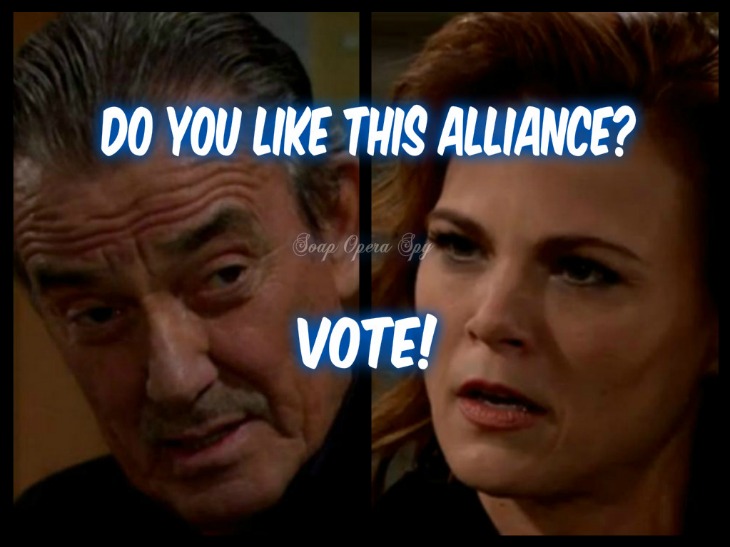 The Young and the Restless (Y&R) spoilers tease that Victor (Eric Braeden) and Phyllis (Gina Tognoni) are gearing up for a huge takedown. They’ve joined forces to get Luca (Miles Gaston Villanueva) out of Summer’s (Hunter King) life for good. Phyllis and Victor are certainly an unlikely duo, but their scheme could create some interesting situations.

Are you on board with this strange alliance? Do you approve of Phyllis and Victor as a team? Before you decide, let’s think about what this really means. First of all, it’s nice that Phyllis and Victor are willing to put aside their differences for Summer’s sake. They may hate each other, but Summer matters more.

Of course, Jack (Peter Bergman) might be right about letting Summer make her own mistakes. She needs to follow her own path in life. Still, Phyllis doesn’t want to see Summer end up with another dud husband. That’s understandable after what Summer went through with Austin (Matthew Atkinson).

As for Victor, he’s witnessed Luca’s shadiness firsthand and he’s not about to let this punk marry his granddaughter. Victor and Phyllis know that they can be beneficial to each other at the moment. If it helps Summer avoid additional pain, they’re prepared to pause their feud for a while.

When you think about the level of hatred here, this Young and the Restless storyline might seem quite farfetched. Phyllis can barely stand to be in the same room with Victor, but she’s trying to make it work. Victor definitely isn’t a big fan of Phyllis’ either.

Again, maybe we should just consider it a testament to the great love they have for Summer. Goodness knows Summer makes poor choices. She probably needs all the help she can get.

Luca undoubtedly has some buried secrets. Victor suspects that Luca was behind the oil crisis and he’s setting a trap to expose the truth. Both Victor and Phyllis just want Summer to see Luca for the creep they think he is. Y&R viewers are anxious to see what’s in store.

If they pull off this plan, Summer may indeed dump Luca. However, there’s always a chance that something will go wrong. If Luca manages to cover his tracks, Victor and Phyllis could come out looking like the bad guys in all of this. Summer may shun them when she realizes they’ve been targeting her fiancé. This could lead to terrible news for several relationships.

Naturally, The Young and the Restless would let Phyllis and Victor play the blame game. They could rip into each other over their botched scheme. That might make Phyllis plot the revenge Victor has been expecting. Regardless, it’s clear that this bizarre partnership won’t last long.

What do you think about Phyllis and Victor’s alliance? Do you support their team effort or is it too weird considering their history? We’ll give you updates as everything plays out. Vote in our Y&R poll and don’t forget to check CDL often for the latest Young and the Restless spoilers, updates and news