‘The Young and The Restless’ News: Why Adam and Chelsea Are Our Y&R Cupid Couple of 2016 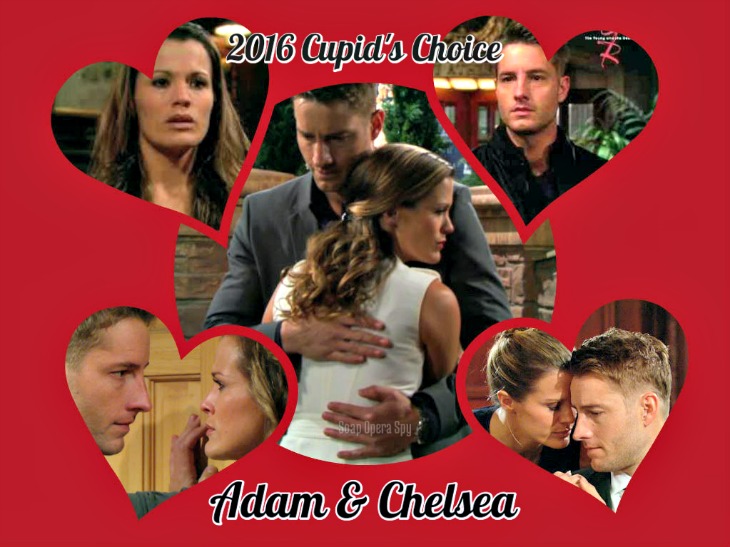 ‘The Young and The Restless’ (Y&R) is celebrating Valentine’s Day with lots of romance but our pick for the best cupid couple of 2016 for Y&R has to be Adam Newman [Justin Hartley] and Chelsea Newman [Melissa Claire Egan].

Adam and Chelsea have overcome so much to be together – even the boundaries of death. When Adam and Chelsea first met, she was a breath of fresh air for him because he could be himself with her without fear of judgment which was a revelation for Adam.

Although lately, it seems Chelsea has been a bit more judgy, but that’s just because she knows he’s not coming clean to her about everything like he once did. Losing their first child may have ripped their first try at marriage apart, but they’ve come a long way since then.

Since Adam came back to Genoa City as Gabriel Bingham, it has become more and more apparent that Chelsea and Adam are meant to be. The way that Adam was captivated by Chelsea when he saw her for the first time looking out through his new “Gabe” face was poignant.

You could tell Adam wanted to reach out to her and tell her who he was, but he wasn’t in a position to do so and had to watch his true love with someone else. Then when it finally came time and he revealed to Chelsea that Gabe was Adam and told her to look into his eyes, who didn’t cry with her?

That moment when Chelsea couldn’t deny anymore that her Adam was back was heart wrenching. Watching all of their pain fall away and their love rise up in its place was hypnotic. And now they’re going strong – or at least they were.

When Chelsea packed a suitcase last week, it was a scary moment for Chadam fans. But Adam was able to talk her down, of course. This is the woman who has stood strong by his side when he was facing the trial for the hit and run – and who was ready to run away with him forever.

They still have one obstacle to face, though, and that’s the big reveal of Christian’s paternity and the truth that he’s Adam’s son. Fingers crossed that Adam and Chelsea’s epic love will also be able to withstand this shocking revelation.

Because Adam and Chelsea have overcome so much and they’ve remained strong in their love and passionate as ever, we think they are the best cupid’s couple for 2016 from ‘The Young and The Restless.’

What do you think Y&R fans? Do you agree that Adam and Chelsea are the most romantic couple going right now in Genoa City? Share your comments on Chadam and come back to Soap Opera Spy every day for more ‘The Young and The Restless’ spoilers and news.