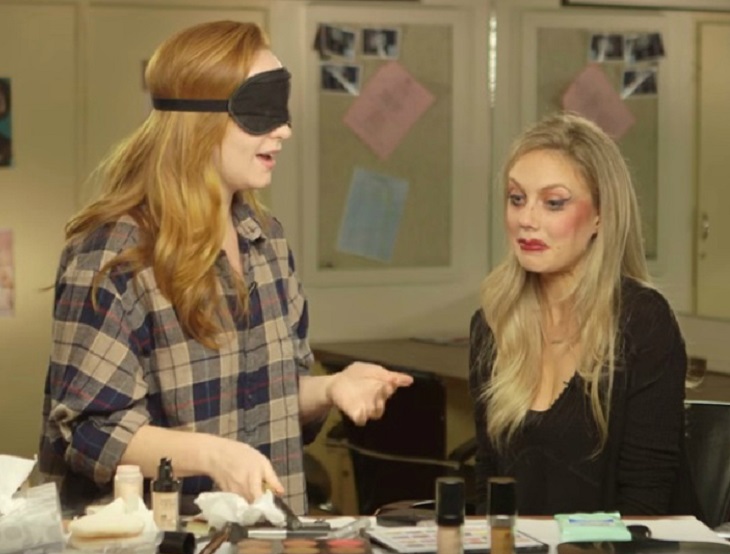 ‘The Young and The Restless’ (Y&R) spoilers tease big drama as May sweeps wind down in Genoa City, but over on the CBS Daytime YouTube channel, things are getting more hilarious as Melissa Ordway (aka Abby Newman) and Camryn Grimes (aka Mariah Copeland) take on the makeup challenge.

If you haven’t checked out the CBS Daytime YouTube channel, it’s must watch viewing. In addition to the first round of makeup challenges featuring Amelia Heinle (aka Victoria Newman) and Hunter King (aka Summer Newman), there is a ton of other content that’s hilarious.

One of the best is the three-part mini-mock soap series “The New Yorkers” which features ‘The Bold and The Beautiful’ actors Scott Clifton, Karla Mosley, Linsey Godfrey and John McCook. It’s spot on – complete with outrageous accents, evil twins, a guy back from the dead, and a pregnancy plot.

The makeup challenges are also excellent. In this round of the series, on-screen rivals Melissa Ordway and Camryn Grimes face off. Grimes puts on a blindfold before applying makeup to Ordway’s bare face. If you watched the Heinle and King video, you know it was pretty bad.

To be fair, Camryn Grimes does pretty well to start with and gets an impressive coating of base, powder and bronzer onto Melissa Ordway’s gorgeous face before things go really bad. But where the video gets really hilarious is when Greg Rikaart (aka Kevin Fisher) sits in Ordway’s place.

Strangest (and funniest) of all is that as soon as Grimes touched Rikaart’s face, she knew it was him and called them out on the swap but then went ahead and slathered blush all over his face for trying to prank her in the midst of a prank.

When Ordway took her seat again, things took a turn for the ridiculous as Grimes slathered her with a smoky eye look that made it look like poor Melissa Ordway had been punched in the face and then enough lip liner and lipstick to make The Joker proud.

The results were hilarious and Melissa Ordway promised revenge in part two of the serious – coming soon – when she gets to put on the blindfold and take a crack at Camryn Grimes’ face. Can’t wait to see how that turns out!

And the whisper challenges with Y&R stars Steve Burton (aka Dylan McAvoy) and Joshua Morrow (aka Nick Newman) were absolute gut busters as one wore headphones and tried to guess what the other was whispering – it was definitely NSFW.

This YouTube channel is a great feature by CBS that gives fans a fun look at their favorite soap stars making fun of themselves and each other. See the full makeup challenge video below and check back with Soap Opera Spy often for more ‘The Young and The Restless’ spoilers and news.

Share your thoughts in the Comments section below, on our Facebook Page,  join our Facebook Group or Head over to our Discussion Board to Talk Soaps Daily!
Continue Reading
Place your ad here
Loading...

‘General Hospital’ POLL: Which GH Lady Was The Best Dressed At The 2016 Nurses Ball? VOTE!