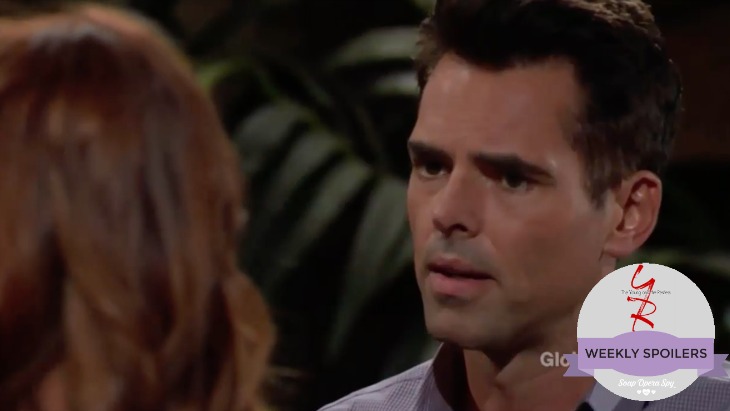 “The Young and the Restless” spoilers for Wednesday, May 25, tease that Victoria (Amelia Heinle) will try to put out the media fire associated with Adam’s (Justin Hartley) arrest. At Newman Enterprises, Victoria issues a statement indicating that she’s optimistic about the company’s outlook. Afterwards, she cancels the rest of her appointments for the day and heads off to Adam’s penthouse.

Meanwhile, Chelsea (Melissa Claire Egan) and Adam ponder the idea of leaving town with Connor (Gunner and Ryder Gadbois) tonight. Even though they wouldn’t be able to come back, Adam decides that it would be a small sacrifice. He wants to be with his family, not locked up in prison. 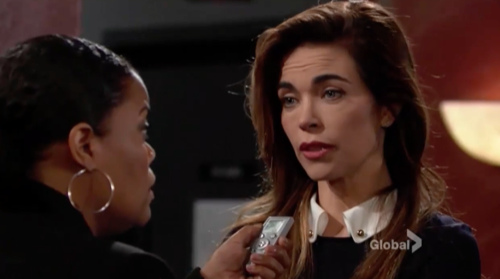 While Chelsea packs their bags, Victoria arrives and gripes about the bad press. Adam is annoyed with Victoria’s ranting. He contends that he’s the one who’s facing the false charges. Victoria admits that she doesn’t believe Adam murdered Constance (Sally Kellerman). Chelsea enters with suitcases and Victoria groans. She insists that Adam needs to stay and fight this. Otherwise, Victor (Eric Braeden) wins.

Adam departs to get some things straight with Victor. Once he’s gone, Chelsea wonders why Victoria is pushing so hard for Adam to stay in Genoa City. Victoria suggests that Adam and Victor share a similar thought process. She thinks Adam could help the family beat Victor at his own game.

Other “Young and the Restless” spoilers say Adam and Victor will face off. In prison, Adam complains about Victor setting him up. The confrontation gets heated and Adam starts to leave. Victor shouts for Adam to sit down. An emotional Adam thinks Victor has always hated him, but Victor recalls times when he was proud of his son. Victor and Adam can’t seem to see eye to eye, so Adam takes off. Victor sits alone and cries. 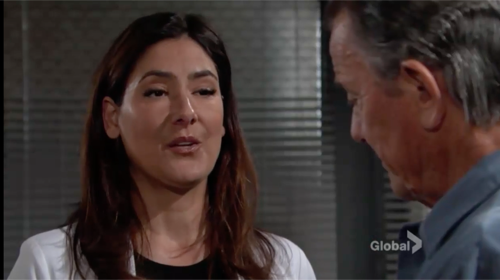 Later, Victor tells Meredith (Alicia Coppola) that he has proof Adam killed Constance and could use it to bring him down. He says he’s the only thing keeping Adam from going to prison. Meredith states that Victor’s family doesn’t deserve him. Victor gushes that he doesn’t deserve Meredith. Back at the penthouse, Adam tells Chelsea that they have to stay. Fighting Victor is the only path to freedom.

At Billy’s (Jason Thompson) place, he leaves a voicemail for Phyllis (Gina Tognoni) about what happened in the park. He feels it was real and he wants Phyllis to get in touch with him. Ashley (Eileen Davidson) drops by and once again digs for info about the new woman in Billy’s life. Billy hears about Ashley’s conversation with Jack (Peter Bergman) and he’s not pleased.

Ashley doesn’t want to see Billy give up on Victoria, but she says she’ll drop it. Moments later, Ashley calls Phyllis and asks her to come to the park. She thinks she knows what’s bothering Billy and she wants to talk. They meet up and Ashley suggests that Billy is putting his future with Victoria at risk. She says Billy has moved on with someone and he’s really wrapped up in it.

Phyllis hints that it’s probably a fling, but Ashley believes it’s much more serious than that. She concedes that it could be a rebound, but Billy is definitely smitten. Ashley feels like the woman could get hurt in all of this. At Newman, Victoria reads a positive news story and turns to Victor’s portrait. She indicates that she’ll make her father proud whether he likes it or not. 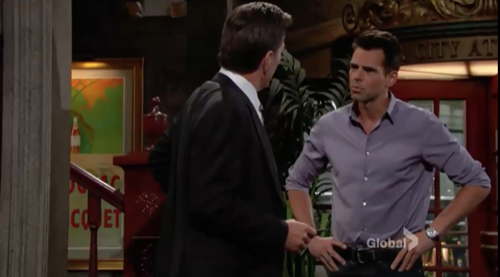 At the athletic club, Billy spots Jack with a room key and learns that he has a romantic night planned with Phyllis. Ashley takes Jack aside and Billy sneaks up to see Phyllis. She’s in lingerie and Billy insists that she can’t just forget what they shared. Billy isn’t sure he can live without Phyllis. She fights it and tells him to go. Billy wishes Phyllis would just let this be real for them.

Elsewhere, Ashley and Jack discuss Billy’s situation. Jack says Phyllis backed off and he thinks Ashley should do the same. Ashley feels like Billy is throwing away his future with Victoria, but she agrees to let it go. When Jack shows up in his suite, Phyllis grabs him and pulls him toward the bed.

Billy is sulking alone when a waitress named Bethany (Chrishell Stause) appears. She confesses that she used to have a crush on Billy back when she worked at On the Boulevard. They start flirting and hit it off. Y&R rumors hint that the impending romp with Bethany won’t help Billy drop his quest for Phyllis. Stick with the CBS soap for updates on what’s in store.

‘Days of Our Lives’ Spoilers Wednesday May 25: Aiden Visits Chase – Ciara and Claire in Court – Fynn and Kayla Hit the Road