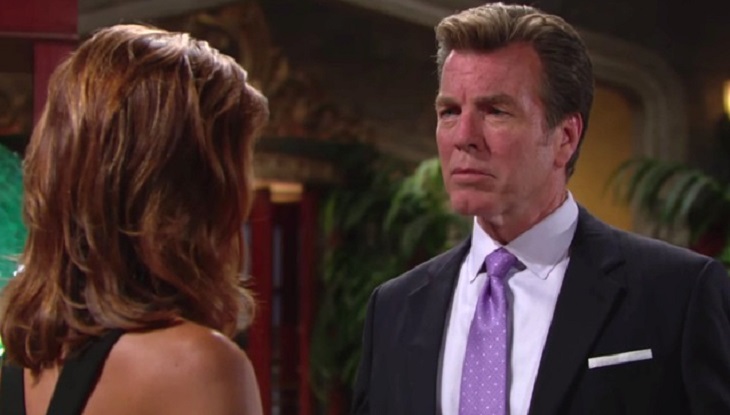 As savvy fans of ‘The Young and the Restless’ know, Chuck Pratt, Jr. has been replaced as head writer by Y&R writer alumni Sally Sussman. While it’s fair for any viewer to critique Pratt’s body of work, it is reasonable to also say that his ‘Philly’ reveal is playing out well. With whatever one thinks about Pratt’s style during the past few years, the dialogue all involved actors delivered in the now-exposed Phyllis (Gina Tognoni) and Billy (Jason Thompson) relationship was sweetly serrated.

Smartly blended scenes preceded the climax this week. Jack (Peter Bergman), played as a fool for months, initially apologized to his wife for doubting her after listening to Colin’s (Tristan Rogers) mixed claims about Phyllis. Then, in subsequent incidents, Jack realized his world was crumbling.

Ashley (Eileen Davidson), playing off clues she recently gathered, got Billy to admit that he was involved with Phyllis. But, this lesser Abbott man initially told his sister only part of his romantic story. After Jack arrived at his executive suite, Ashley told him that Billy was in love with Phyllis. Jack went in search of Billy, who was connecting with a Phyllis’ replacement at Brash and Sassy.

Jack confronted his brother and shoved him to the ground multiple times. The inebriated lout gathered himself and, while provoked, still protected Phyllis’ honor by claiming that he was the only one in love. Jack left and was later seen looking out the windshield of his Tesla toward the building where ‘Phack’s’ couple’s therapist practices. Phyllis emerged, didn’t spot her husband, and went home.

Viewers hadn’t seen the Abbott family compound in awhile. But, it served as the setting for the climax where Jack confronted Phyllis about Billy. Yes, Chuck Pratt’s final episodes are playing out. And soon his name will be replaced by Sally Sussman’s in the opening credits.

The now-former co-executive producer and head writer faced a challenging situation when he agreed to take written responsibility for Y&R. He offered a different and debatable take on Genoa City during his tenure. With Adam’s (Justin Hartley) apparent death having just played out, the awaited ‘Philly’ reveal became a fitting follow-up. Possibly, one of Pratt’s last acts will also see Sully exposed as Christian. In any event, the longtime soap veteran heads to Fox’s musical drama ‘Star’ as showrunner and co-executive producer after having tied up some loose soapy ends.