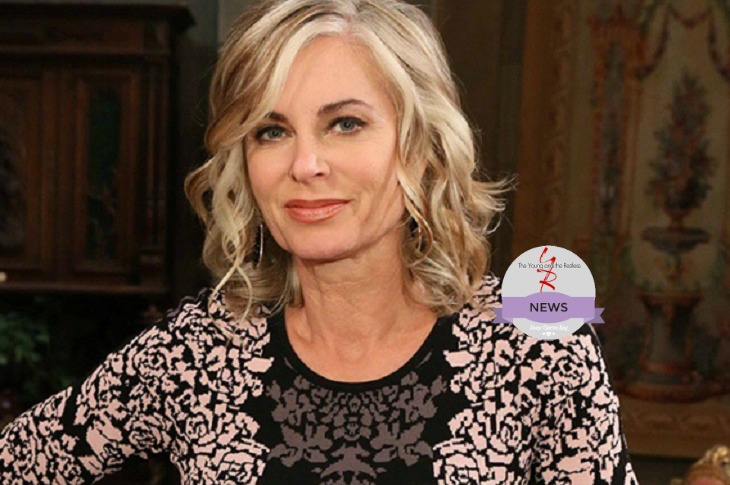 ‘The Young And The Restless’ star Eileen Davidson is a soap queen.  Before she began her stint on ‘Y&R‘ as Ashley Abbott many years ago, she actually starred on the soap opera ‘Santa Barbara.’  Recently Davidson resurrected her character Kristen DiMera for a stint on ‘Days Of Our Lives,’ and she has appeared on several ‘The Bold And The Beautiful’ crossovers.

Recently, Eileen Davidson took her TV skills to a different venue and began appearing on the hit Bravo reality show ‘Real Housewives of Beverly Hills’ with her husband Vincent Van Patten.  It turns out ‘RHOBH‘ isn’t the only project that Eileen and her hubby have been working on together – they actually are starring in a new movie together called ‘Spychosis.’

According to IMDB, ‘Psychosis‘ will be an Action Comedy – and Eileen and Vince will be joined by the amazing Jamie Lee Curtis – and the screenplay was written by the very talented Tom Arnold!  The film isn’t set to be released until 2017, however there is a brief summary available.  The summary teases, “When a dormant spy, exposed by the Wikileaks controversy, is suddenly being hunted by assassins he seeks help from an emergency room nurse to remove an experimental chip implanted in his head years before.”

Eileen will be playing the President of the United States in the new movie, and her husband Vincent’s character will be Secretary Kerr.  How fun will it be to see Eileen and Vince working together in the White House?!  Talk about a political power couple!  So ‘Y&R’ fans, are you as excited about Davidson’s new movie as we are?  Let us know what you think in the comments below!