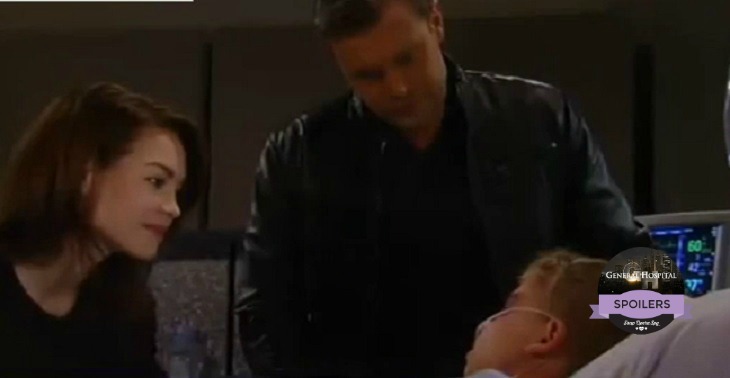 He has Liz Webber [Rebecca Herbst] and Jason Morgan [Billy Miller] by his side and Jake mistakes the presence of both parents as a sign of a reunion. Jake asks if they’re all a family again. Expect Jason to be nice about the whole thing, but Liz will do something brave.

Related: Ashley Jones Opens Up About New Role on ‘GH’ As Parker Forsyth

Liz will finally confess to her son that she was lying and it was her lies that split up she and his dad. Jake will be shocked – as will Jason since he’s been covering for Liz for weeks to try and protect their son from the ugly truth. Liz is trying to do better and this is step one.

Also at GH, Sonny Corinthos [Maurice Benard] gets grilled by Dr Griffin Munro [Matt Cohen] about why he’s lying to Carly Corinthos [Laura Wright] about his progress. Sonny will try to deny it, but it’s very likely that Epiphany Johnson [Sonya Eddy] told Griffin the truth about Sonny.

As a nurse, Epiphany is ethically bound to be honest with the doctor that’s treating Sonny and telling him is not breaking Sonny’s confidentiality. Sonny will come clean, but will likely not tell Griffin he’s plotting mob revenge and that’s why he’s keeping it a secret.

Sonny will get Griffin to promise to keep his secret – which he has to anyway since Sonny is his patient but Griffin may figure out this is about mob stuff. And how excited are we to see Epiphany in Crimson’s real woman issue? Maybe Milo can pose with her…

Tracy Quartermaine [Jane Elliot] reveals that she knows Hayden Barnes’ [Rebecca Budig] dad and an angry Hayden/Rachel tells her never to speak his name again. Who could it be? Does Hayden have mob ties? Is it Paul Hornsby [Richard Burgi]? Who could it be?

Nikolas Cassadine [Tyler Christopher] belatedly tries to figure out who he’s married to and starts by looking into Baxter Corbin and how he could be linked to Rachel/Hayden. What will Nikolas find out? What can he do even if he finds out the truth?

Nathan West [Ryan Paevey] overheard Dillon Quartermaine [Robert P Watkins] saying things to Maxie Jones [Kirsten Storms] that freaked him out and made him jealous but Maxie reassures him that he’s the only guy for her.

Hayden later alerts Dillon that Tracy is acting peculiar and may need to be seen over at GH. Liz gets comfort from a surprising source after her upsetting confession to Jake. Is it Sam? Obrecht [Kathleen Gati]? Whom?

Related: The Amazing Rebecca Herbst – A Look Back at 20 Years of Liz

And Nikolas will invite Liz and her boys to stay at Wyndemere since her house is ashes which puts her in a good position to keep an eye on Hayden. Good thing since Hayden is up to some major shenanigans. Also, Sonny and Alexis will soon figure out Kristina is keeping secrets and have to address it.

Don’t miss a moment of the Thursday, February 11 episode of GH and come back to Soap Opera Spy often for more ‘General Hospital’ spoilers and news.