‘The Young And The Restless’ Interview: Jared Breeze Exclusively Discusses His Young Artist Award, Plus His Thoughts On Max Rayburn 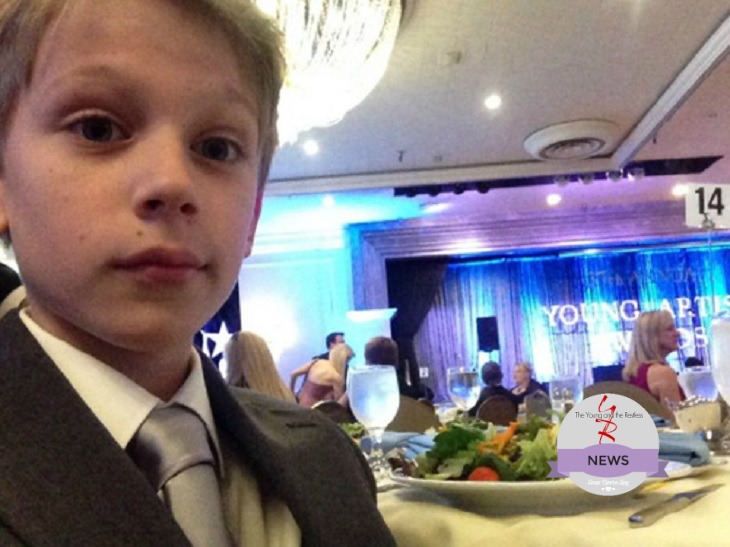 Still rejoicing after his superb win at the Young Artist Awards on Sunday evening we had the opportunity to speaking with ‘Y&R’ star Jared Breeze (Max). It was a fun chat as he emphasized his enthusiasm about winning the award, playing Max Rayburn on ‘The Young and the Restless’, what it was like playing Ted in the movie ‘The Boy’ and so much more. Here’s the full interview for your perusal:

SOS: Hey, greetings Jared, and how are you today?

SOS: Oh yes, by the way congrats on your win, what was that like?

Jared: Thanks. When I won I was freaking out, couldn’t believe it. We thought Jacob Trembley would win.

SOS: Indeed! but it was your wonderful portrayal of Ted that you won you that award. How was it for your portraying a 9 year old socio-path?

Jared: In a way hard because I am so the opposite of Ted, so it helped to have practiced with the director to be angry or distant.

Jared: Time was tight so after a while we had shortcuts where Craig would say: Angry face or stone face.

SOS: Do you see similarities between Ted and Max?

Jared: Ted has a real problem; I think Max just tries to be mean to Abby so he can be with his dad. He likes most of the others.

SOS: And which if any, was harder to play? (between Ted and Max)

Jared: Ted. He did some REALLY bad stuff on purpose.

SOS: Haha! Yes he did. How did u land a role on daytime’s number one show?

Jared: After the second call back it took about a month before they decided. the audition scene had some anger in it, I guess I did that good. They probably saw THE BOY too.

SOS:  We know you are not able to say much about Max’s future but what can you share about what’s coming up. Will we ever see him and Abby get along?

Jared: Possibly, when it works for his benefit. Max really seems to play people as he needs them.

SOS: That’s true, are you working on any other projects you can talk about at the moment?

Jared: Yes, a few school projects. Nothing in entertainment other than Y&R.

Jared: Thank you so much!

SOS: There are probably a few young children aspiring to be an actor like yourself what would you like to say to them?

Jared: Follow your heart and no matter how hard the script, keep memorizing the lines and practice.

SOS: Thanks for stopping by to chat with SOS all the best with the future.

There you have it Y&R fans, are you enjoying Jared on the CBS soap opera as Max? What are your thoughts on this interview?  Share your thoughts in the comments below, and don’t forget to check Soap Opera Spy daily for news and updates on all of your favorite soap stars!

‘The Young and The Restless’ News: Jason Thompson To Appear On Hallmark’s Home & Family

‘General Hospital’ Poll: A Possible Maxie And Griffin Hook-Up, Hot Or Not? VOTE!