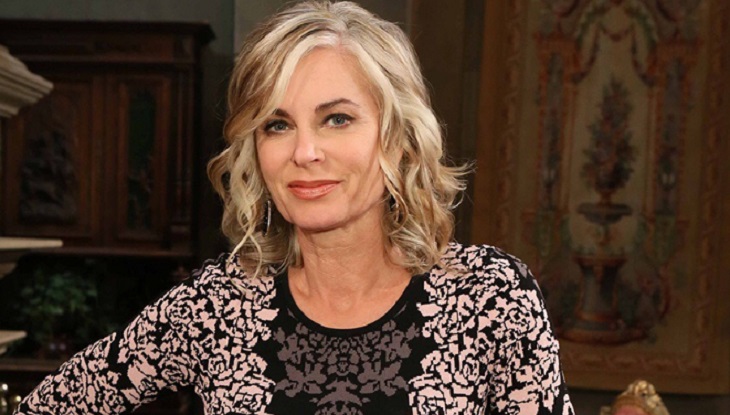 The Young and the Restless’s Eileen Davidson, better known for her part as Ashley Abbott on Y&R, recently sat down with Michael Fairman and gave him the lowdown on where things stand with Ashley, what she’s been up to and how Ashley needs a new man on the show.

When Eileen was asked by Michael Fairman of who she would like to work with from the cast romantically she revealed “Yeah, it would be nice for them to find a man for Ashley. But I have not discussed it at this point. There has been a changing of the guard at the show recently that you sometimes wonder what’s the point putting in your two-cents when a lot is happening. So I really haven’t, but it’s probably time I do.”

Y&R’s Eileen Davidson also reveals that Ashley loves her daughter Abby (Melissa Ordway) and that’s about all Ashley has going on in her life right now. She also says Ashley is happy for Abby and Stitch ( Sean Carrigan), even though her and Stitch was once a thing. Eileen also revealed that Ashley’s feelings for Stitch are over or at least for now or until further notice, later on though the show may do something else with that.

Eileen and Fairman also discussed whether or not Ashley and Victor Newman might reunite at some point. The actress dished, “I’m always open for a good storyline, but I don’t know. They have tried it, and they have been there and done that. But again, it depends on how everything is written.”  Would you Y&R fans like to see that?

Eileen Davidson also confirmed  that she is returning to “The Real Housewives Of Beverly Hills” for season 7. This will be her third season on the show. She started on Bravo back in season 5.

Eileen also joked that she never in a million years thought she would be on a reality show, however it has opened up some things for her. So if you like seeing Eileen Davidson on “The Real Housewives Of Beverly Hills” you can catch her on the upcoming season.

Altogether, the interview really was a good read, and you can check out the full interview on Michael Fairman’s official website.