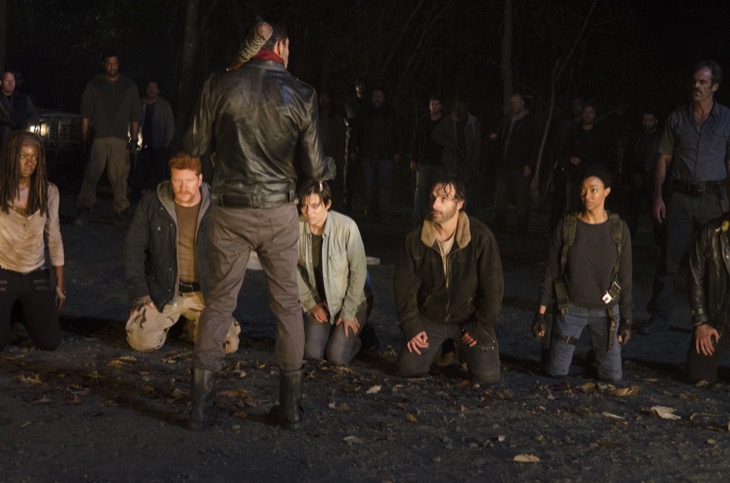 ‘The Walking Dead’ Trailer Releases this Friday, What Will It Not Reveal? The first Season Seven Trailer is set to be released on Friday, July 22, 2016 at Comic – Con. What will the trailer not reveal? Negan’s (Jeffrey Dean Morgan) victim! However, it has been confirmed that those who have watched the epic scene where Negan destroys his victim are left speechless. Executive Producer, Greg Nicotero, who directed this episode, has stated that the scene has been viewed by people involved with ‘The Walking Dead’.

Nicotero went on to explain, “Some of the incoming directors when they come in, they read all the scripts. As the cuts are available, we want them to see the show because we want them to get a flavor for what we’re doing visually. A couple have seen it and then they stand next to me for about 24 hours going, ‘F—!’ And I’m like, ‘What?’” Nicotero was unable to put into words the reaction of those who have viewed the scene.

Nicotero continues about the opening scene of Season Seven of ‘The Walking Dead’, “It’s pretty amazing, I’ll tell ya. People cry which makes me happy and sad at the same time.” Sounds like it is going to be everything the fans have been anticipating. The only question still unanswered is Who does Negan kill? There has been plenty of speculation as to who the victim will be and how many victims will there be. The primary candidates at this time is Glenn (Steven Yeun) and/or Abraham (Michael Cudlitz).

What will AMC and ‘The Walking Dead’ put into a trailer that the fans will want to see? Nicotero comments, “It’s gonna be tricky, because it’s like, ‘What do you talk about?’” However, Nicotero has assured us that the trailer will be well worth the watch and the fans will not be disappointed. Just viewing other scenes in the trailer may reveal who is still with ‘The Walking Dead’ crew, and therefore not eliminated by Negan in the beginning.

‘The Walking Dead’ will return to AMC for season 7 on Sunday, October 9, 2016. What will be revealed in the trailer? Will the trailer be successful, once fans realise that Negan’s victim will not be revealed? Let us know what you think in the comments below!