‘The Bold and The Beautiful’ (B&B) spoilers for reveal that Liam Spencer [Scott Clifton] will NOT bow out gracefully and respect Wyatt Spencer’s [Darin Brooks] marriage to Steffy Forrester [Jacqueline MacInnes Wood]. In fact, Liam will do just the opposite and sparks a war for his woman this week.

Wyatt will make an effort to smooth things over with Liam while making it clear that he and Steffy are in this for the long haul and their marriage is the real deal. But is Wyatt trying to convince Liam – or himself? Wyatt may be worried that Steffy will have second thoughts now that Liam is back.

That’s why Wyatt pressed Steffy on getting their wedding bands tattooed onto their hands. Liam was surprised when he saw the tat on Steffy’s finger but that won’t dissuade him from trying to steal her away from his brother. 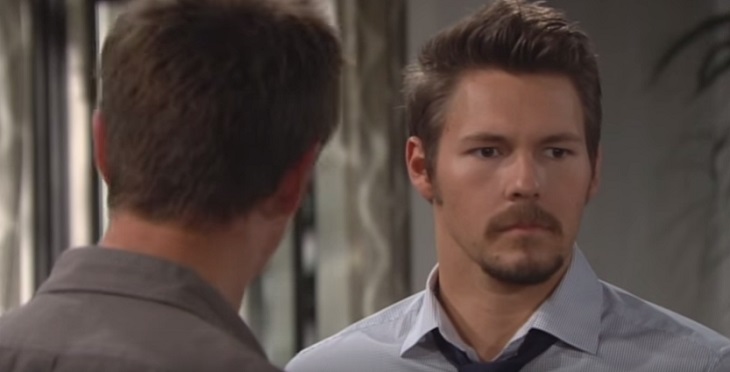 Related: Steffy Overwhelmed by Wyatt and Liam’s Clashing – Ridge Won’t Back Down, Insists Douglas Is His Son Now

Even though Liam’s champagne and candlelight evening failed with Steffy, he’s not going to give up. And the more Wyatt tells him to back off and respect his marriage, the more Liam will decide to NOT do that and will keep pressing for Steffy to get back with him.

Another point to consider is whether Wyatt’s insecurities about Steffy will factor into how all this plays out. If Wyatt acts clingy while Liam is wooing Steffy and reminding her of their happy history, will Steffy be swayed towards Liam? Will Wyatt’s desperation dampen Steffy’s affection for him?

It will be Liam that’s the antagonist in the war of the Spencer brothers. Wyatt feels compassionate about what happened to Liam so he’s not willing to play dirty against his brother. But Liam is angry, jealous, and resentful and sees Wyatt is a usurper.

What depths will Liam sink to in his war with Wyatt? Will we soon see Liam go dark in his efforts to win Steffy back? Liam is angry and feels like he’s been cheated. And since Wyatt is Quinn Fuller’s [Rena Sofer] son and she’s the author of Liam’s misery, there’s no telling what Liam might do.

What do you think B&B fans? Who are you rooting for in the war between Wyatt and Liam for Steffy’s heart? Share your comments below and tune in to Soap Opera Spy every day for ‘The Bold and The Beautiful’ spoilers, news and more.

‘The Young And The Restless’ Spoilers Wednesday May 11: Victor Pushes Adam To Make His Move – Fiona Stirs Up Suspicions for Jack – Nick Still on ‘Team Villy’

The Bold And The Beautiful Spoilers: Does Sally Spectra Feel Guilty For Her Lies?…

The Bold And The Beautiful Spoilers: Quinn Tries To Save Marriage –…

The Bold and the Beautiful Spoilers: Shauna Packs Up And Moves To Vegas, Ridge Tags…