‘The Bold And The Beautiful’ Spoilers Wednesday April 27: Quinn Desperate To Win Back Liam, Deacon Warns Her Stay Away 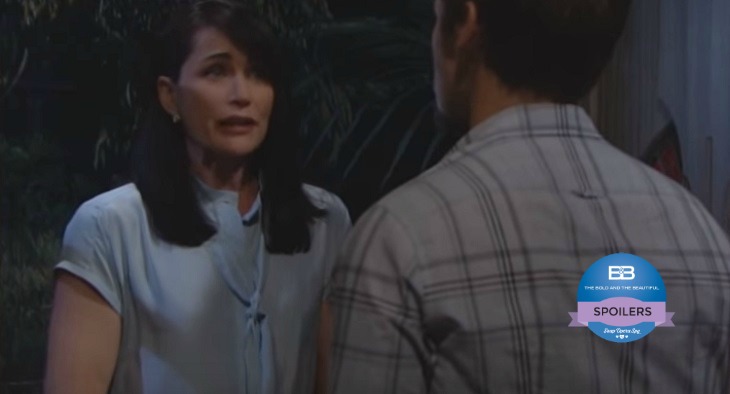 “The Bold and the Beautiful” spoilers for Wednesday, April 27, tease that Deacon (Sean Kanan) will believe Quinn (Rena Sofer) should reevaluate her plan to reach out to Liam (Scott Clifton). Quinn will feel the need to explain, but Deacon will suggest that it’s futile. He’ll say Quinn could explain from now until the end of time and it wouldn’t change Liam’s feelings toward her.

Of course, we all know how stubborn Quinn can be. She’ll disregard Deacon’s warnings about the trouble she may run into. Quinn will be adamant that she needs to apologize for her mistakes. Liam deserves it after everything he’s been through. Quinn will decide to face Liam and let him do what he will with her.

Meanwhile, Liam will want Steffy (Jacqueline MacInnes Wood) to understand the depth of his affection. “The Bold and the Beautiful” spoilers say Liam will insist that he loves Steffy. In fact, he never stopped loving her and he always will. Liam will think Steffy’s eyes are screaming that she loves him, too.

Steffy will have a lot to consider after this conversation with Liam. She’ll head off to reflect on all of the fond memories they’ve made. She’ll likely wish she hadn’t rushed into this marriage with Wyatt (Darin Brooks). Steffy let herself fall for Liam’s brother and now she’s facing the most difficult decision of her life. She’ll have to hurt someone she truly cares about.

Back at Liam’s place, Quinn will show up to make amends. She’ll probably realize that true forgiveness is going to be tough to achieve. However, Quinn will want to admit that she did some things she shouldn’t have. She’ll inform Liam that she’s ready to accept the consequences for her actions.

Liam will listen to Quinn’s plea, but he’ll just be more enraged than ever. It’s easy to see why Liam is upset. Quinn robbed Liam of his life and he’s struggling to get it back. As he copes with the possibility of losing Steffy for good, Liam will really let Quinn have it. B&B rumors hint that Quinn might have a surprise or two in store. Stick with “The Bold and the Beautiful” for updates on this strained encounter.

So B&B fans, what do you think about the news that Deacon and Quinn will clash over her plan? Will Steffy express doubt about her marriage or refuse to budge instead? Will Liam make Quinn pay the price for ruining everything? Voice your opinion in the comments below and don’t forget to check Soap Opera Spy often for the latest “Bold and the Beautiful” spoilers, rumors, updates and news.

‘General Hospital’ POLL: Who Is New Jason Better With – Liz or Sam? VOTE!

The Bold And The Beautiful Spoilers: Why Doesn’t Ridge Just Get Marriage To Shauna…