‘The Bold And The Beautiful’ Spoilers: Nicole Raging With Jealousy And Hormones – Sabotage Sasha’s New Job? 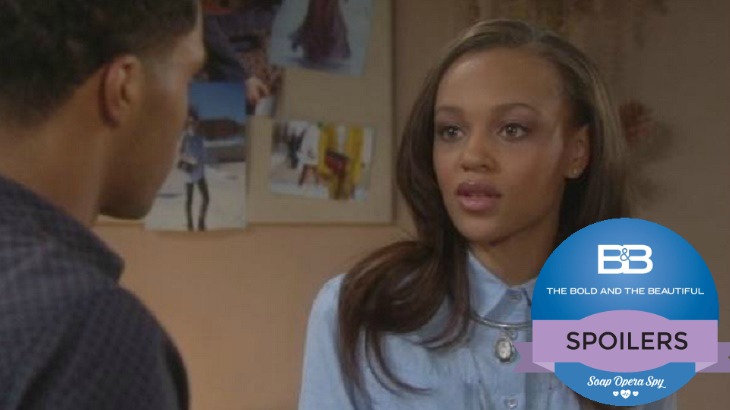 ‘The Bold and The Beautiful’ (B&B) spoilers reveal that Sasha Avant [Felisha Cooper] will finally have a little something of her own when Rick Forrester [Jacob Young] offers her a modeling gig after seeing shots that Zende Forrester [Rome Flynn] took of the beauty.

Nicole Avant [Reign Edwards] is not happy about this – and we have to credit some of that to pregnancy hormones. After all, Nicole went a little nuts when she saw Zende talking to the chick from legal – and now she sees him clicking away, snap-happy, taking sexy pics of her BFF Sasha.

Nicole is queasy and wants to throw up, but she was trying to suck it up to help Zende out. Then she finds him with Sasha and it’s on. Rick will appreciate Sasha’s fine film work and offer her a job, but she may not get to keep it for too long.

The problem is, Nicole has Rick’s ear since she’s his baby mama. B&B spoilers indicate that Nicole will hint to Rick that maybe he shouldn’t give Sasha her big modeling break. Whether Nicole indicates that Sasha is unreliable or just too green for the job is yet to be seen.

But there’s no way Maya Avant [Karla Mosley] and Rick are going to deny Nicole anything she wants – no matter what Zende says. If Nicole succeeds in getting Sasha canned, she will be unknowingly sparking a major rivalry.

Nicole is being selfish, no matter what. After all, Nicole got her big break because Maya cozied up to Rick. Why shouldn’t Sasha get a break because she knows the Avants? Why would Nicole discredit years of friendship with Sasha for no reason?

After all, it’s not like Forrester Creations only needs one model – and Nicole can’t imagine that Forrester’s ad campaigns will be on hold for the whole nine months that she’s a human incubator, can she? So why not let Sasha have an opportunity?

Nicole is usually pretty sweet, but the pregnancy hormones are making her into something of a jealous b-word. Even if Sasha had no emotional baggage, what Nicole is doing is hurtful. But what Nicole doesn’t know may hurt her soon.

If Nicole had let Sasha have the job, which might have been enough to satisfy her half-sister. But Nicole doesn’t know that Sasha has 18 years of hurt feelings festering. Nicole has everything that Sasha never could. She has a loving sister, mother and father that are married, the Avant last name, Zende and more.

Sasha has nothing. In fact, it sounded like her mother might be dead based on her telling Julius Avant [Obba Babatunde] recently that her mother isn’t a problem anymore. Sasha’s completely alone in the world and Nicole may have just taken the one thing she finally got for herself.

Seems pretty awful, right? Nicole may have unleashed a whole world of hurt on her life by shutting down Sasha’s chance to better herself – and there’s no telling what Sasha may do if she feels like she has nothing to lose. Watch out Avants!!

Stay tuned to Soap Opera Spy for daily ‘The Bold and The Beautiful’ spoilers and news.

‘Days Of Our Lives’ Spoilers: Hope Continues To Unravel, In Danger After Stefano Confrontation – Can Rafe Save Her?