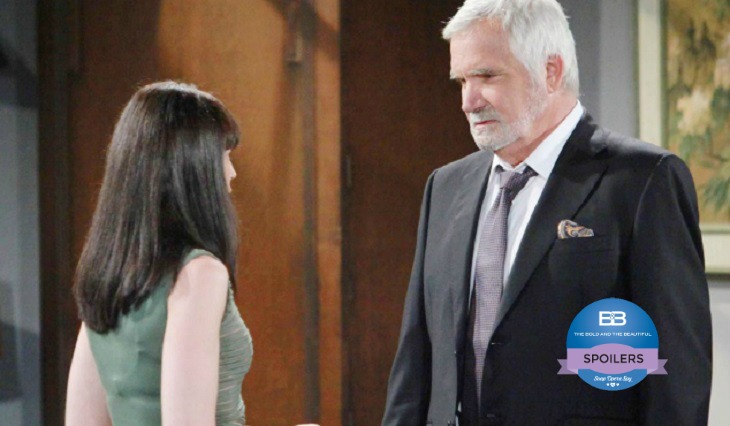 The Bold and the Beautiful’s couple that took all fans by surprise now have a wedding date set for September 23. So with the day right around corner will everything go as planned for Eric Forrester (John McCook) and Quinn Fuller (Rena Sofer)?

With Eric and Quinn’s wedding on the horizon, do you think their family will put their feelings aside and show up? When John McCook was asked by Tv Insider if Eric is truly shocked that his kids don’t show up for the wedding he answered “Yes, because he talks with them about forgiveness and how that was a very big part of who their mother, Stephanie, was. It was her greatest attribute.”

The Bold And The Beautiful spoilers are teasing that none of his kids show up, but he did add that Ivy Forrester (Ashleigh Brewer) does. Do you B&B fans think this is wrong on their part? We all know how they feel about Quinn but is this taking it overboard?

When it was brought up of how Eric and Quinn’s relationship was kept a secret and even fans didn’t know anything about it until the day it was aired John McCook reveals “The rest of the cast didn’t know about it and neither did most of the writers, until it was revealed on page 22 of a script one day.” So this is how everyone was kept in the dark and boy was it a Shocker.

John McCook has been on B&B for about 30 years now and when asked if he ever thought he would get another front-burner plot he says “I have to admit. I did not. I certainly wasn’t counting on it, nor was I disappointed that it wasn’t there. I figured I’d someday be the old Patriarch who just comes in for Weddings and funerals and Thanksgiving dinners.” Are you B&B fans happy to see Eric Forrester more?

A lot of B&B fans have been voicing their opinions on social media how they would like some of the original characters back on the show and have more screen time and it is certainly great that has happened for John McCook. So B&B fans are you ready for a wedding you won’t forget? Stay tuned to “The Bold and the Beautiful” because it is soon coming up!