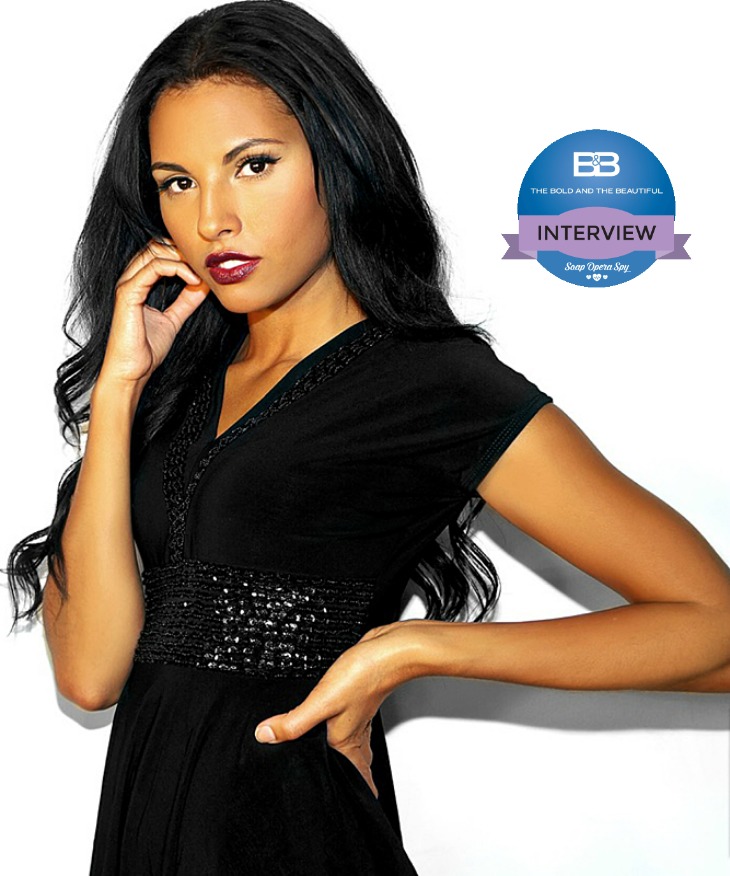 “The Bold and the Beautiful” Felisha Cooper [Sasha Avant] recently spoke with Soap Opera Spy exclusively about some of her “B&B” co-stars. The actress also took time to discuss another project she has been working on – “Swedish Dicks” a comedy about two bumbling Swedish private detective.

Speaking with Felisha you quickly discover that she hasn’t changed much since moving to Los Angeles two years ago. She is a sweet, enthusiastic and well-spoken young woman with an infectious laugh.

Felisha grew up in North Carolina with an older brother and younger sister – and many Southern ladies who watched their stories every afternoon. “They watched ALL the stories, flipping channels back and forth,” Felisha laughed as the interview started.

SOS: What was your first day like on the set of “The Bold and the Beautiful”? Were you nervous? Did you know anyone?

Felisha: It was almost surreal! Being on the set made it seems so official. Reign Edwards [Nicole Avant] was so nice, she came right up to me and took me around to meet everyone. We kind of knew each other because we have the same manager. We’ve actually become really good friends. It’s fun, because we’ll fight in a scene and then go right back to laughing and joking around when we’re done.

SOS: Who was the one cast member who intimidated you just a little bit?

Felisha: Thorsten Kaye [Ridge Forrester]! But he was super nice, a real gentleman. He walked up to me and with that gravelly voice said, “Hi, welcome. I’m Thorsten. Good to have you.” I wanted to say back, “Yeah! I know you’re Thorsten Kaye!” I was just so excited and he’s so handsome.

SOS: Which cast member are you most excited about working with on “The Bold and the Beautiful”?

Felisha: John McCook [Eric Forrester]! He’s such a presence on the set, I’d love to have a few scenes with him soon.

SOS: What other projects are you working on? Tell us about this comedy “Swedish Dicks.” What’s that all about?

Felisha: It’s a comedy and I play the daughter of this Swedish private detective who is always meddling in people’s lives and making all kinds of mistakes. Then my character has to go clean up all his messes. We’ve filmed 10 episodes and I feel so blessed to be part of the show. It’s amazing to be a part of “The Bold and the Beautiful” but to also get to work with the cast of this comedy has been such a blessing.

SOS: What are you looking forward to doing now that you’ve moved to Los Angeles and are working on two shows?

Felisha: I think at some point I’d like to direct. After we’re done shooting a scene sometimes I’ll run over to the camera to see what it’s like from the other side. I’d really like to do that at some point, get into directing. I would also like to find more storylines for interracial actresses. Coming from an interracial background I really enjoy exploring those kinds of roles.

SOS: What do you do when you have time off?

Felisha: I love to go out dancing with friends. If I’m not sweating I’m not dancing enough! I also like to binge watch comedies. I love “Friends” – it never gets old.

SOS: We know you can’t reveal anything but what do you hope TPTB have planned for Sasha?

Felisha: I can’t wait to find out myself! It’s been so much fun working with Reign and Rome [Flynn, Zende Forrester] I almost hate that Sasha has come between them.

“The Bold and the Beautiful” fans what do you think the writers have in store for Sasha? Can she seduce her way into the Forrester family?

The Bold And The Beautiful (B&B) Spoilers: Quinn And Brooke Face-Off –…