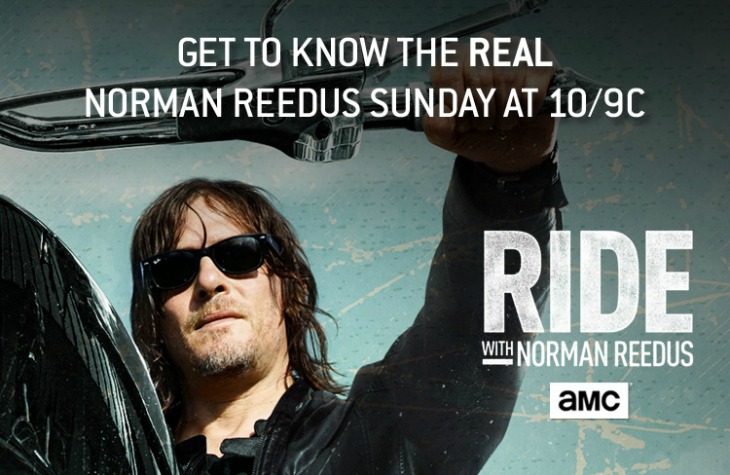 AMC’s “Ride With Norman Reedus” premieres tomorrow, (June 12, 2016) and it looks like a good show. It will be interesting to see Norman in a way you’ve never seen him before—giving the fans an inside look at his life, passion, and a glimpse of his personality.

AMC released a sneak peak of the show, as he travels down California and stops to see Roland Sands Motorcycles. Roland is known worldwide for his amazing bikes and his passion for the two wheelers. Sands competed on Discovery’s Biker Built-off several years ago.

Reedus and Sands looked around the shop and Norman got the rare treat of riding one of his bikes. He seemed genuinely excited about being able to take one of Roland’s motorcycles out for a spin.

In another video, Norman travels to the desert with some ‘biker chicks.’ They are taken through the mountains and sees a fabulous view. They snap a picture on the top of the mountain with a crater in the view. Norman admitted that he’s seen many things in his life, but never seen the desert.

Norman revealed in an interview a few weeks ago that this show will be different for his fans. There is no talk of The Walking Dead or any other shows he MAY be working on. The only thing discussed is his love for travelling and motorcycles. He will travel the country, looking for rare bikes and good conversations about them.

Reedus hopes his fans will enjoy seeing him on “Ride with Norman Reedus” and will somehow feel his passion for motorcycles. He is not only an actor and Zombie (ahem walker) killer, apparently he is a rock n roll loving motorcycle enthusiast too.

‘Days Of Our Lives’ Spoilers: Abigail Badly Burnt In Fire, Chad Rushes To Her Side – Says Ben Is Back!