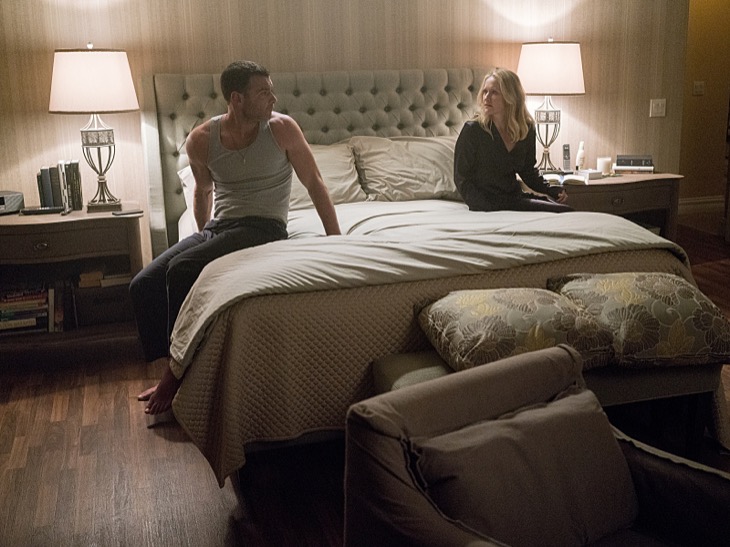 ‘Ray Donovan’ season 4 episode 1 ‘Girl with Guitar’ spoilers reveal that Ray [Liev Schrieber] has recovered from his shooting at the hands of the Armenian Mafia. After collapsing at Father Romero’s [Leland Orser] Ray was taken to a secret location to recover under the watchful eye of a young boxer named Hector Campos [Ismael Crus Cordova].

Terry Donovan [Eddie Marsan] has survived the shooting at Mickey Donovan’s [Jon Voight] apartment. Terry discovers the Church will not accept him as a volunteer missionary in Brazil and blames it on his Parkinson’s which seems to be escalating in severity.

At the end of ‘Ray Donovan’ season 3 Mickey Donovan [Jon Voight] was forced out of town by Ray because Mickey’s involvement with the Armenian Mafia put the entire Donovan family’s lives at risk. Of course, the police are after Mickey and pressuring Ray to give up his father’s whereabouts.

Mickey can’t stay out of trouble and after a bad experience with peyote he is arrested and hospitalized. Mickey’s nemesis Detective Shelia Muncie [Michael Hyatt] is anxious to have Mickey back in her custody and pays Mickey a visit in his Nevada hospital room.

Ray is determined to bring the rest of the Donovan family back together and seeks out his daughter Bridget (Kerris Dorsey], begging the teenager to come home. Ray plays on her sympathy by telling her Terry may be going away as a missionary for a couple of years. Bridget agrees to come home for dinner that evening.

Abby Donovan [Patricia Malcomson] is also facing a health crisis. Season 4 episode 1 has Abby undergoing a CT mammogram. We find out Abby has been diagnosed with stage zero breast cancer but does not share this information with Ray.

Just as Ray appears to be getting out from under the criminal influence that has ruled his entire life Sophia Kovitsky [Embeth Davidtz], a wealthy Armenian art collector, manipulates Ray into a deeper and darker and more dangerous situation than ever before.

Yet another incident blows up Ray’s attempt at a normal and peaceful family life. Hector, who has thrown away years of sobriety, makes a frantic call to Ray after a domestic violence incident at a motel.

Arriving home late for the family dinner he has organized Ray discovers Sophia has sent Bridget a $60,000 ‘Girl with the Guitar’ painting – a signal from the Armenian mob that if Ray doesn’t cooperate each one of his family members will suffer, starting with Ray’s daughter.

‘The Young And The Restless’ News: Justin Hartley Begins Filming Primetime’s ‘This Is Us’ – Will He Stay At ‘Y&R?’