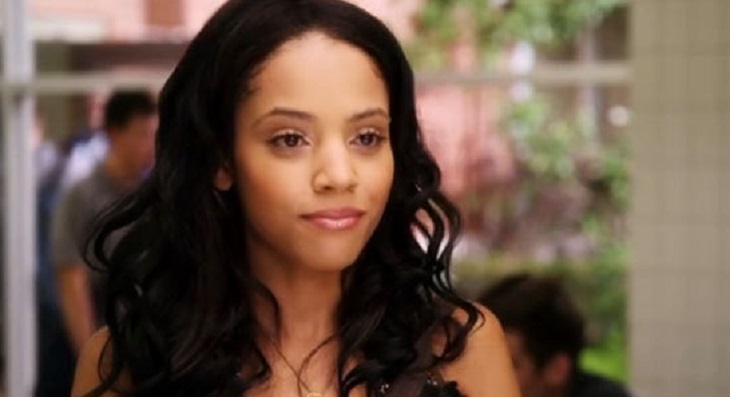 Pretty Little Liars theories and spoilers have teased for years that Maya St. Germain [Bianca Lawson] could be very much alive.  After all, her death never settled well with PLL fans, and it seemed that there was much more to Maya’s mystery that was never really explained.  The fact that after all of her involvement with Alison DiLaurentis [sasha Pieterse], “A,” and the NAT Club, she was snuffed out by a random stalker that followed her to Rosewood was even more frustrating.

This weekend Pretty Little Liars showrunner Marlene King held an impromptu Q&A session on Twitter, and she dropped a bizarre spoiler that has us all scratching our heads.  A fan asked Marlene, “Please, Is Maya still alive?”  King responded, “No.  But she has a relative you may meet.”  Huh?!

Pretty Little Liars theories have been floating around since Season 2 that Maya St. Germain’s death was a result of her knowing too much and being involved with the NAT Club.  While we all hoped that Maya would turn up alive after all, in a way this twist does make sense.  It looks like fans may be half right – could Maya’s relative be arriving in Rosewood to confront the liars about Maya’s death because it doesn’t seem to be adding up.  But, why pop up now, 5 years after the time jump?  We are just as confused as you guys!

@branson_tom no, but she has a relative you may meet

Pretty Little Liars spoilers recently revealed that Holden will be returning in the final season of PLL next Spring.  And, we all know that it was revealed after Maya’s death that she and Holden were attending the same super secret parties.  Could Holden’s return have something to do with Maya’s mysterious relative?  Is it possible that Maya had a twin?  Let us know what you think in the comments below and don’t forget to check Soap Opera Spy for more Pretty Little Liars Season 7 spoilers and news!

‘The Young And The Restless’ Spoilers: Cane Wants Control of Brash and Sassy – Pushing ‘Villy’ Out Of Company