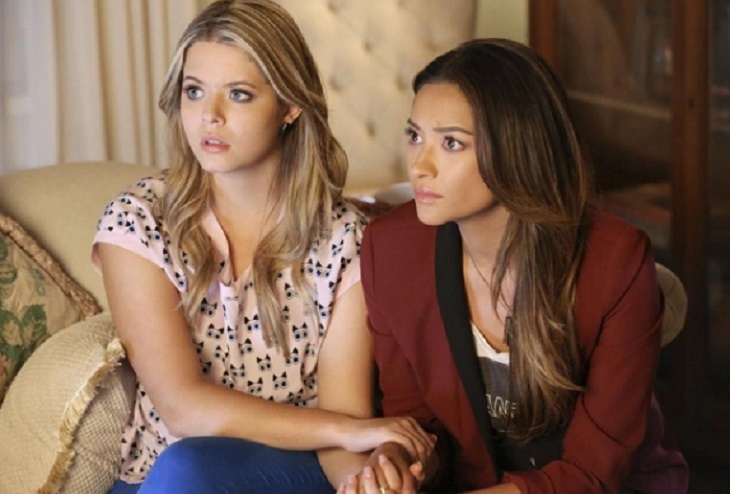 Pretty Little Liars spoilers teased for weeks that it would be revealed in the Season 7 summer finale that one of the girls was pregnant.  But, that didn’t take away from the shock factor when Alison DiLaurentis (Sasha Pieterse) revealed to Emily Fields (Shay Mitchell) that she was pregnant with Elliot/Archer’s baby.  No one wants to take a pregnancy test and find out that they are having the man who robbed her and held her hostage’s baby.  But, is it really Elliot’s baby, or is there something even scarier about Alison’s pregnancy?

Pretty Little Liars spoilers tease that when Season 7B, the final episodes of PLL, returns in 2017 – it will be absolutely insane.  PLL has had some crazy plot twists throughout the years, and shocking reveals that none of us saw coming.  Could it be revealed when Pretty Little Liars returns for its final run that Alison DiLaurentis is pregnant with Emily’s baby?

This Pretty Little Liar theory seems so crazy that is might just be true.  In Season 7 Emily was strapped for cash when she returned to Rosewood, so she decided to harvest her eggs and sell them to a couple that was trying to conceive.  “Uber A” sabotaged Emily’s plan, and stole her eggs from the fertility clinic where they were being held.

Around the time that Emily’s eggs were stolen, Alison DiLaurentis checked in to the hospital.  Elliot Rollins, her “husband,” was her primary physician – he had Alison heavily drugged and sedated.  Ali was oblivious to what was going on around her, and lost hours of unaccounted for time while she was basically held hostage in the hospital.  Is it possible that “Uber A” (with or without Elliot’s knowledge) snuck in to the hospital with a fertility specialist and implanted Alison with one of Emily’s fertilized eggs Alison?  That still would leave the question – who is the male donor that they used to fertilize Emily’s eggs?

Marlene King recently sat down with TV Line after the Season 7 finale and shared a few Pretty little Liars spoilers.  The showrunner teased that Alison’s pregnancy story wouldn’t be cut and dry – and there was much more to it than meets the eye.

What do you think PLL fans?  Is it possible that there is some sort of baby swap storyline brewing on PLL?  Is it just a coincidence that Emily’s eggs were stolen and Alison wound up pregnant within a few weeks of each other?  Let us know what you think in the comments below!

‘The Bold and the Beautiful’ Spoilers: Quinn Stands Up for Eric as a Leader – Eric Swayed by Quinn’s Ideas – Ridge Preps Team for Takedown