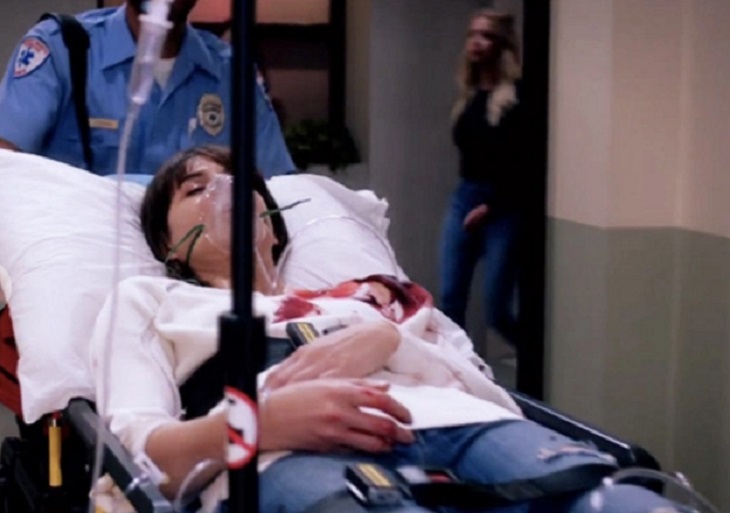 Pretty Little Liars spoilers teased that the Summer 2016 finale would be an intense one, but no PLL fans were prepared for the craziness that went down this week on Freeform.  At this point, we have know idea how we are going to contain our excitement until the Pretty Little Liars Season 7B premiere in Spring 2017.  Soap Opera Spy scoured the internet, and put together a full list of all of the PLL Season 7B spoilers, here’s everything you need to know about the all new season of Pretty Little Liars premiering in 2017.

The End Is Here

Pretty Little Liars rumors have floated around all season that Season 7 would be the final season of PLL, sadly Marlene King and the cast confirmed that Season 7B will be the last 10 episodes of the popular drama to ever air on Freeform.  The showrunner promised that before the final curtain call, “Uber A” will finally be revealed, and PLL fans’ questions will be answered.  (Seriously though, can they answer THIS many questions in just 10 episodes?!)

Alison’s Pregnancy Will Be Huge In 7B

Pretty Little Liars spoilers hinted for a while that one of the liars would be pregnant in the Summer 2016 finale.  PLL fans were certain that it would be Aria Montgomery (Lucy Hale), but it turned out to be Alison DiLaurentis (Sasha Pieterse).  Obviously the last thing that Ali wants is to be pregnant by Charlotte’s boyfriend, who fake married her, nearly killed her, and robbed her blind.  But, Ali also is desperate for a family – so she may keep the baby after all.  But, it sounds like there might be something fishy going on with Alison’s pregnancy.  Marlene King dished to TV Line, “nothing is average on PLL. Everything is spectacular.”

There are a TON of deaths on Pretty Little Liars.  But, it’s never been one of the main characters, one of the good guys, someone we haev been as attached to as Toby Cavanaugh (Keegan Allen).  And, usually when we think one of our beloved PLL characters is dead – it turns out that they aren’t.  However, Pretty Little Liars spoilers tease that Toby’s death might not be a hoax this time around, that car accident looked pretty fatal, plus he is not listed as a cast member in Season 7B.

Pretty Little Liars spoilers tease that the huge bomb Mary Drake dropped in the Season 7A Finale, that she is Spencer Hasting’s (Troian Belisario) mother, will not be ignored.  When PLL returns in 2017, the episodes will pick up just a few moments after the summer finale and the writers won’t be brushing the Mary/Spencer reveal under the rug.  It looks like they are staying true to the Pretty Little Liars books, and Spencer Hastings was adopted…which just makes the twisted Hastings/DiLaurentis Family Tree a little bit more complicated.

Pretty Little Liars spoilers have confirmed that Julian Morris will be returning in Season 7B as Wren Kingston.  Could Wren finally be the missing link that ties everything together and finally makes some of these storylines make sense?  Or will he just serve as the season’s red herring for one, last, final time?  PLL spoilers tease that the first Rosewood resident to come in contact with Wren will be none other than Ezra Fitz (Ian Harding).