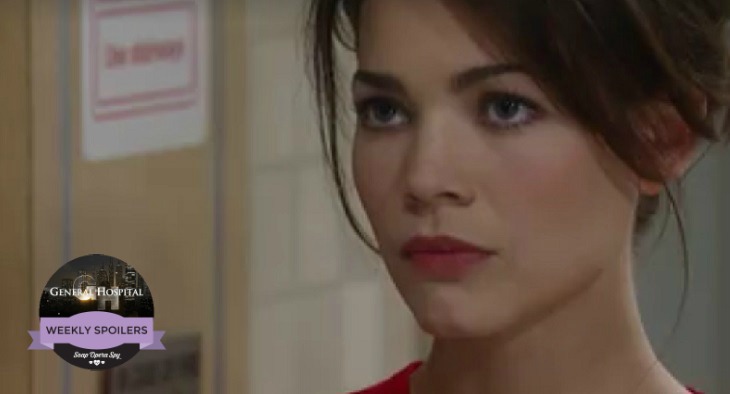 General Hospital spoilers for the week of August 15-19 tease that Ava Jerome (Maura West) has been nothing but consistent when it comes to her daughter Kiki Jerome (Hayley Erin) and her on-again-off-again boyfriend, Morgan Corinthos (Bryan Craig). This week, after she notices the tension between Kiki and Morgan, she will take measures to break them up for good, including trying to manipulate Dillon Quartermaine’s (Robert Palmer Watkins) and his feelings for Kiki to do it. Dillon refuses to do it, but as fate would have it, Kiki and Dillon will find themselves together in familiar circumstances.

GH’s struggling art therapist, Franco Baldwin (Roger Howarth) and Nurse Elizabeth Webber (Rebecca Herbst), make amends after she brushes him off when he is detained during their first official date and is accused of being the serial killer inside GH’s walls. Next week, they will find themselves making a decision. Franco tells Liz that he can only be “bad” Franco, will they be moving forward with their budding relationship, or will Liz’s ex, Jason Morgan (Billy Miller) continue to interfere?

Later, Liz is shaken by something she receives and Franco is there in her time of need. Little Jake and his mom have a heart to heart discussion. Is the subject of their talk going to be her and her feelings for his art therapist, Franco or the mysteries about his time on Cassadine Island?

With the wedding of the year approaching quickly, General Hospital weekly spoilers tease that Lulu Spencer Falconeri (Emme Rylan) and bride-to-be, Maxie Jones (Kirsten Storms) get together to discuss wedding plans. What better time to have a bashing session about Nathan’s ex-wife Claudette “CJ” Boland (Bree Williamson)? At the same time Dante Falconeri (Dominic Zamprogna) and Nathan West (Ryan Paevey) are reunited at work. Later, Maxie and Nathan will have a shocking discovery, will this revelation effect or even halt their wedding plans?

General Hospital’s infamous “Davis girls” will all have pivotal roles this week. After the blow out between Alexis Davis (Nancy Lee Grahn) and her daughter, Kristina Corinthos Davis (Lexi Ainsworth), their relationship remains on very shaky ground. Molly Lansing Davis (Haley Pullos) will attempt to be the peacemaker, which will only cause tension between her and Kristina.

Alexis is preparing for the most important hearing of her life, and after pleading with her estranged husband, Julian Jerome (William DeVry), will things go as she hopes or will Olivia Falconeri’s (Lisa LoCicero) anger and testimony ruin everything? With all her daughters dealing with their own drama, Alexis confesses and leans on Sonny for support.

General Hospital spoilers tease that Sam Morgan McCall (Kelly Monaco) and Jason are stuck in limbo medically speaking. Sam has revealed to Jason that she is pregnant, and they are elated, but they are awaiting results to other medical testing. This baby is an absolute miracle since it was nearly impossible for her to have had their son, Danny. Will she be able to carry this baby to term, or will the Cassadine curse truly be ruining her life?

You would never think these two would acknowledge anything in common, but Tracy Quartermaine (Jane Eliott) and Laura Webber (Genie Francis) find themselves discussing Luke Spencer (Anthony Geary). Is the bracelet and earring going to be Luke’s, or another ploy of Helena Cassadine’s (Constance Towers)? After letting Luke out of her system, Laura is now thinking about Kevin Collins (Jon Lindstrom). Is there a future for the two of them?

Be sure to watch General Hospital all of next week and check Soap Opera Spy often for spoilers, updates and news!