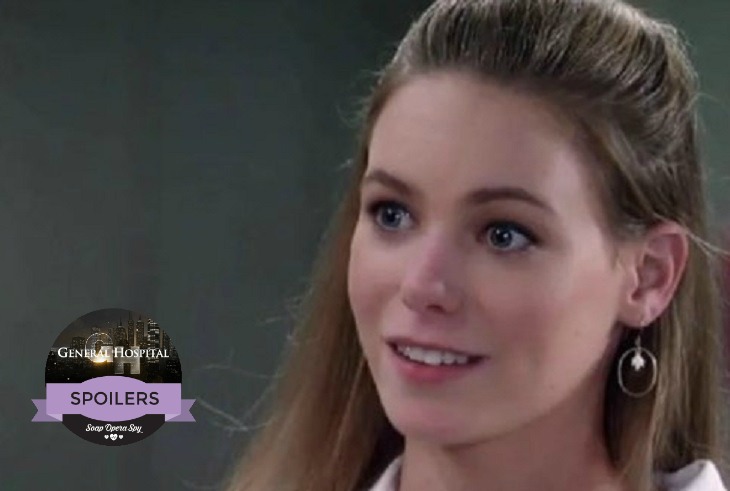 For months now, “General Hospital,” viewers have been speculating about Nelle’s (Chloe Lanier) true identity and what’s behind the mysterious blonde’s sketchy agenda. Well, it looks like payday is on the horizon for both greedy Nelle and restless viewers!

Could it be that the silver baby rattle Nelle is hiding is a legit family heirloom and not a silver plate fake like the young phony herself? Brace yourself GH viewers, it looks like Nelle’s about to move up in the world!

Nelle bounced into town when Carly (Laura Wright) went on a mission to find her daughter’s kidney donor. Her search resulted in Nelle’s arrival in Port Charles.

What we do know about Nelle is that she was adopted and her parents made her donate a kidney for some much-needed money; she’s got the scars to prove it!

But it seems that the donation was an act that left Nelle with emotional and psychological scars as well. Her vendetta against Carly prompted many to conclude that Nelle is really Carly’s secret daughter.

Now the truth is out and no one saw it coming: Nelle is a Quartermaine!  General Hospital rumors indicate that the silver rattle she keeps toying with is a guilt-present from her biological mom, Tracy Quartermaine (Jane Elliot).

Longtime GH viewers know that Tracy is a reluctant mom at best, so it makes sense that she would give up another baby when she already had other kids to worry about. Ned Ashton (Wally Kurth) and Dillon Quartermaine (Robert Watkins) are Tracy’s sons, and they haven’t always had great relationships with their mother.

Now we know that back in the day Tracy had a daughter with Ned’s dad, Larry Ashton (Hugo Napier) and Nelle could be the product of their ill-advised union.

Tracy was hellion in her day, and Nelle looks and acts like a chip off the old block. Will Tracy recognize the rattle, and her daughter, or is Nelle in for another rejection?

Or could the silver rattle be a red herring, a false clue the writers snuck in to throw fans off from Nelle’s real identity?

Sound off GH viewers, and let us know what you think of this latest twist in the comments section below!