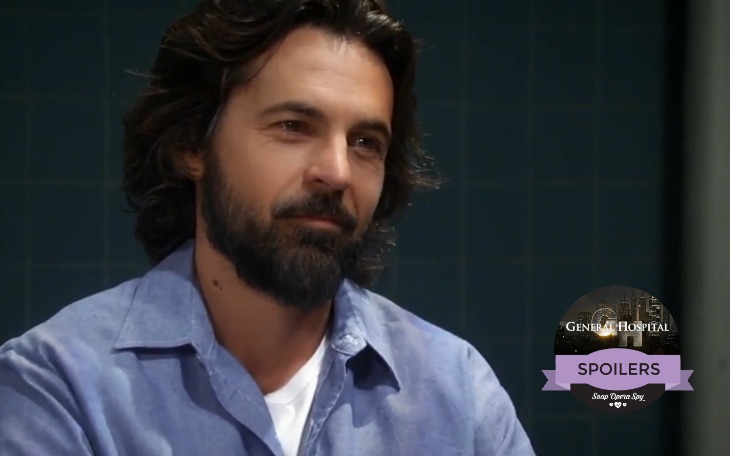 ‘General Hospital’ (GH) spoilers for the week of Monday, April 25 through Friday, April 29 reveal surprises in the Carlos case, Jason recalls his past with Franco, Kristina makes a decision, wedding plans and trouble for other couples – one married, one engaged. Here’s what to expect.

Alexis wants to get the case dismissed, but the witness fouls things up and then she makes a bold move in court that sets Sonny off. Julian takes actions that can be seen as a betrayal to Alexis and makes a confession that shocks Ava Jerome [Maura West].

Jason Morgan [Billy Miller] recalls some horrifying memories of his past with Franco [Roger Howarth] and Sam Morgan [Kelly Monaco] fills in the gaps. Jason and Franco get physical and Liesl Obrecht [Kathleen Gati] and Sam break up the confrontation.

Later Franco tries to reason with Jason that they are both changed men who want to help his son. New Jake Spencer [Hudson West] debuts this week and gets a puppy! Obrecht encourages Franco to think about the man it was when he deals with the new conflict in his life.

Over at Crimson, Nina Clay [Michelle Stafford] and Julian come to a new understanding. New guy Aaron [John DeLuca] has scenes with Sonny but then flirts up Kristina Corinthos [Lexi Ainsworth] who decides to take Sam’s advice and figure out who she wants to love.

Kiki Jerome [Hayley Erin] is getting back to health and Dillon Quartermaine [Robert P Watkins] wants to be her pal. Kiki, however, has her mind on Morgan Corinthos [Bryan Craig] at least for now. Tracy Quartermaine [Jane Elliot] fires Hayden Barnes [Rebecca Budig] this week.

Monica Quartermaine [Leslie Charleson] goes after Obrecht over Hamilton Finn [Michael Easton] and Carly Corinthos [Laura Wright] is still concerned about Finn. Carly gets some advice she didn’t ask for this week – will she ignore the wisdom?

Michael Quartermaine [Chad Duell] is committed to finding Sabrina Santiago [Teresa Castillo] and makes progress in Puerto Rico but Sonny is worried and later he and Michael argue over his affection for the GH nurse.

Sam and Jason find out someone has been watching them and Jason continues to worry about his propensity for violence. Maxie Jones [Kirsten Storms] reaches out to Sam for help to find out more about Claudette because she can’t let go of Nathan West’s [Ryan Paevey] past.

Jason isn’t sure about Sonny’s motives in a certain matter and wants to make things clear with the Port Chuck mob boss. Paul Hornsby [Richard Burgi] follows through on a threat as Andre Maddox [Anthony Montgomery] steps up to defend Anna Devane [Finola Hughes].

Lucas Jones [Ryan Carnes] and Brad Cooper [Parry Shen] talk wedding plans – looks like their nuptials will coincide with the Nurse’s Ball in May. Finally, Franco worries Nina is done with him after she sends a message that disturbs him.

So much happening next week on GH from Monday, April 25 through Friday, April 29. Watch and check back with Soap Opera Spy daily for more ‘General Hospital’ spoilers, news, interviews and more!

‘The Bold and the Beautiful’ News: Jacob Young Sings Waylon Jennings – Shares Acoustic Version of “Just To Satisfy You” Video