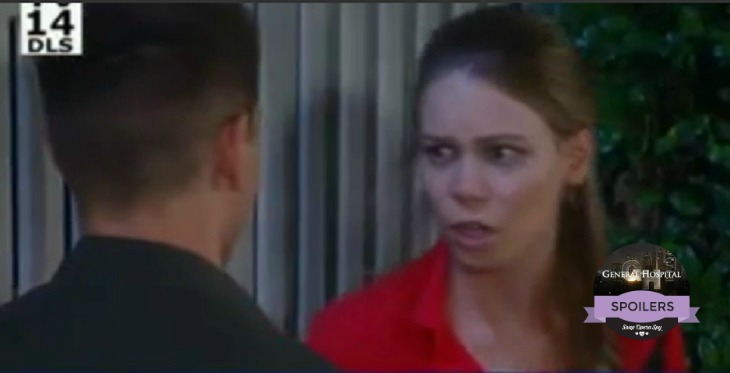 General Hospital spoilers for Wednesday August 10 tease that Jax learns of Carly (Laura Wright) and Sonny Conrinthos’ (Maurice Benard) deception. They had gone behind his and Josslyn’s (Eden McCoy) back and met with Nell (Chloe Lanier), after she showed up unexpectedly at Bobbie’s (Jacklyn Zemen) birthday celebration. Jax wants this to end before too much information comes out. What is Jax hiding and who is he covering for?

Jax insists that Nell leaves and never comes back, but Michael Corinthos (Chad Duell) does a little pleading of his own to Nell; although she doesn’t seem to think he is very charming and tells him to go away, do you think he will be the one to get the truth out of Nell? Will his attention be solely on Nell, leaving Sabrina Satiago (Teresa Castillo) vulnerable to Carlos’ twin brother, the newest addition to General Hospital’s staff, Dr. Joe Rivera (Jeffrey Vincent Parise)?

Kiki Jerome (Hayley Erin) meets with Morgan Corinthos (Bryan Craig) and reveals that she may have given her mother, Ava Jerome (Maura West) information that she could use against them. Will Ava always be Ava, and once again blame Morgan for all of what is happening to Kiki, or will she go to the real source, Darby Collette (Jesica Ahlberg)? Or does she have something far more sinister planned?

Hayden Barnes-Cassadine (Rebecca Budig) who is still be reeling from the shocking news she received from her sister-in-law, Lulu Spencer Falconeri (Emme Rylan) about her husband, Nikolas Cassadine’s (Tyler Christopher) true “death”, will be by Dr. Hamilton Finn’s (Michael Easton) side demanding for him to tell her what she wants to know. What is Hayden up to this time? Is it involving her mother and the secrets she has been keeping and how is Dr. Finn involved?

Last, but not least, we have Ava Jerome walking into her hotel room and she says “what the hell?”, the next scene we have Scott Baldwin (Kin Shriner) and his ex-wife, Lucy Coe (Lynn Herring) literally being caught with half their clothes off. Scotty is once again trying to convince someone that it is not what it looks like. Did Ava walk in on their “walk of shame” the morning after a drunken night together? Or is it as innocent as Scott claims it to be?

Be sure to watch ABC’s General Hospital on Wednesday, August 10, to catch up on all these spoilers and more. Check Soap Opera Spy often for spoilers, recaps and news!