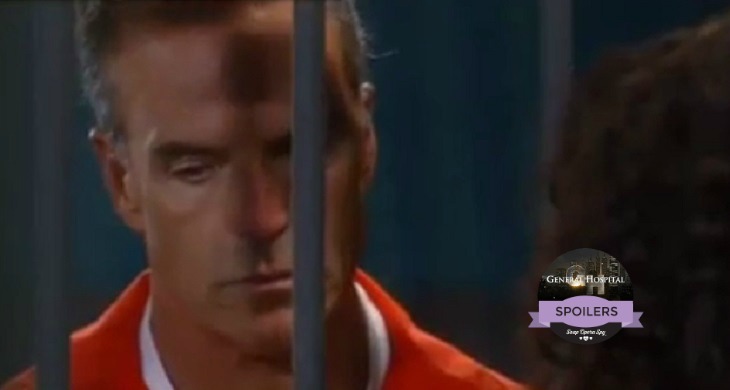 General Hospital (GH) spoilers for Tuesday, October 4, 2016 we see Maxie Jones (Kirsten Storms) discussing Claudette “CJ” Boland (Bree Williamson) with her fiancé, Nathan West (Ryan Paevey).  Even though the DNA test they performed on Claudette’s daughter, Charlotte came back with Nathan being the father, Maxie isn’t so sure those tests are accurate.

General Hospital’s Maxie believes Claudette is lying, and says that if she is lying, everyone needs to know.  Dr. Griffin Munro (Matt Cohen) seems to be in agreement with Maxie and he meets Claudette at The Floating Rib and insists she tell him all about this man that she has tried to get away from, and claims her daughter is in danger from.  Do you think Claudette will be honest with Griffin?

Related: Violence Erupts In Port Charles, Corinthos Family Will Never Be The Same

As we saw on Monday, October 3rd’s episode, Ava Jerome (Maura West) handed some money to Scott Baldwin (Kin Shriner) to retain him as her lawyer, as soon as he revealed that the PCPD figured out who the killer was.  She confesses that she knew D.A. Paul Hornsby (Richard Burgi) was the General Hospital serial killer, and she demands that Scott represent Paul.  She also reveals that she has been messing with Morgan Corinthos’ (Bryan Craig) bipolar medication; something that totally shocked Scott.

After General Hospital’s Dillon Quartermaine (Robert Palmer Watkins) helps Anna Devane (Finola Hughes) rescue his mother, Tracy (Jane Elliot) before his father, Paul had the chance to kill her; things don’t look good for Paul.  Police Commissioner, Jordan Ashford (Vinessa Antoine) confronts him in his jail cell and promises her visit is not going to be a pleasant one.

GH fans cannot help but feel sorry for Nina Reeves (Michelle Stafford).  She has been desperate to have a baby, but cannot carry one to term, thanks to the damage her mother Madeline Reeves (Donna Mills) caused back when Nina was married and pregnant with Dr. Silas Clay’s (Michael Easton) baby.

When a very upset, and unstable Nina forced Ava into labor, and kidnapped her newborn baby, her criminal record prevented her from adopting a baby legally.  GH’s P.I. Curtis Ashford (Donnell Turner) has been trying to help her by doing a private adoption, but he now comes bearing the bad news that there is nothing more he can do.  How do you think Nina is going to react?  She still thinks it is worth it, even if the baby is illegally obtained.

General Hospital’s Sonny (Maurice Benard) and Carly Corinthos (Laura Wright) are thrown for a loop when they find out that their son, Morgan had cheated and plagiarized his first school paper, they are furious and confront him on his erratic behavior.  Will Morgan confess everything that has been going on, or will his parents figure out that his behavior is the result of Ava’s tampering of his medications?