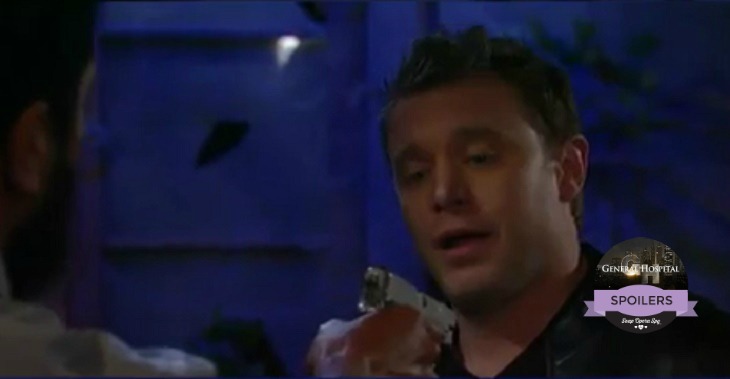 ‘General Hospital’ (GH) spoilers for Tuesday, June 28 reveal that Aaron and Kristina have a talk about their feelings, Nikolas turns Ava down, Jason faces down the barrel of a gun, Sonny makes a dire prediction for Alexis’ fate, and Dante and Lulu talk about Nik.

Aaron Roland [John DeLuca] asks Kristina Corinthos [Lexi Ainsworth] about Parker [Ashley Johnson]. But how does Aaron know Parker’s name? They discuss their feelings and what they want, but Kristina remains conflicted.

Lulu Spencer [Emme Rylan] and Dante Falconeri [Dominic Zamprogna] have a nice lunch at the MetroCourt and she asks if he thinks Nikolas Cassadine [Nick Stabile] might be alive. Does Dante think that Nikolas is likely dead?
Lulu and Dante discuss a way to honor Nikolas’ memory.

At the airport, Nikolas tells Ava Jerome [Maura West] that she can’t come to Greece with him. They’ll argue but, in the end, looks like Ava will end up heading to Cassadine Island as well.

Jason Morgan [Billy Miller] finds the shed where Nikolas and Ava were hiding out – but then an armed man confronts him. Is that guy working for Huxley Lynch [Trent Dawson] or is this yet another facet to the unfolding summer adventure?

The gunman tells Jason that he won’t let him go anywhere and they end up grappling. General Hospital spoilers reveal that Jason ends up knocked out. Does the British guy get the drop on Stone Cold? That seems unlikely.

Alexis Davis [Nancy Lee Grahn] has no idea that Julian Jerome [William deVry] is lurking around waiting to kill her. Julian is in the bathroom staring and in the summer promo, we heard Alexis look at him with interest and asks what took him so long.

But is that another dream sequence like the one of him killing her? Alexis doesn’t seem like she’s in the mood to get busy with her homicidal hubby, so we’ll see. Sonny Corinthos [Maurice Benard] warns Alexis that Julian might harm her and shocks Julian with new info.

What do you think GH fans? Will Nikolas and Ava get away before Sam and Jason find them? How long until Jason recovers from being knocked out? Share your comments below and tune in to Soap Opera Spy every day for lots of General Hospital spoilers, interviews and more.