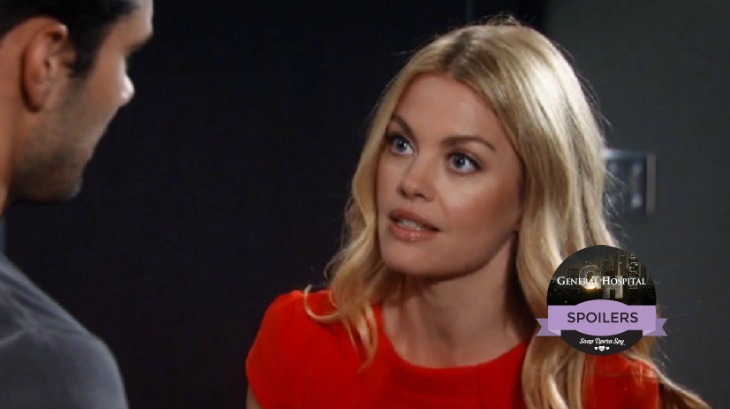 ‘General Hospital’ (GH) spoilers for Thursday, July 14 reveal that Sonny and Carly make someone an offer they can’t refuse, Claudette has an intimate lunch with Nathan, Valerie works the GH case, Franco confronts Liz, and Curtis wants something from Jordan.

Sonny Corinthos [Maurice Benard] talks with Carly Corinthos [Laura Wright] and asks her to promise him something, but what? GH spoilers reveal that Sonny is setting something up and he’ll make a business offer to Kristina Corinthos [Lexi Ainsworth] and Aaron Roland [John DeLuca].

Related: Is Theo Really Valentin Cassadine – Could He Be Nathan’s Real Dad?

Also at the MetroCourt, Claudette Bolland [Bree Williamson] asks the host for an intimate and secluded table for two in anticipation of her lunch with Nathan West [Ryan Paevey]. Clearly she’s lying to Maxie Jones [Molly Burnett] and wants Nathan back.

Maxie gives Nathan a pep talk before his lunch with Claudette but he’s unsure. She asks if he’s afraid to be alone with her. Is Nathan worried he’ll be tempted? Curtis Ashford [Donnell Turner] runs into Jordan Ashford [Vinessa Antoine] and asks if she’s made a decision.

Related: Is Tyler Christopher Headed Back To ‘GH?’

Curtis wants to be a cop again – will Jordan give him a badge? Looks like Maxie and Curtis may run into each other while digging into Claudette’s secrets since both are on a similar mission and Maxie will discover that Nina Clay [Michelle Stafford] sent Curtis to check into Nathan’s ex.

Over at GH, Valerie Spencer [Brytni Sarpy] is on the case and working to protect the patients and staff from the killer. She talks to Griffin Munro [Matt Cohen] about someone being a sick freak. Is she talking about Franco [Roger Howarth]?

Franco has Liz Webber [Rebecca Herbst] trapped in the elevator and confronts her. Turns out she’s not in danger even though he looks like he’s turning dark. Instead, his feelings are hurt. Franco likes Liz and she made him feel bad.

These two will discuss their pasts and may reach a new understanding. Share your comments below on these spoilers for Thursday, July 14 and tune in to Soap Opera Spy for more General Hospital spoilers and news.

‘General Hospital’ News: Is Tyler Christopher Headed Back To ‘GH?’

‘Days of Our Lives’ Spoilers Thursday July 14: Jennifer and Chad’s Custody Battle Heats Up, Belle Gets Involved – Ciara Faces Off with Distraught Chase