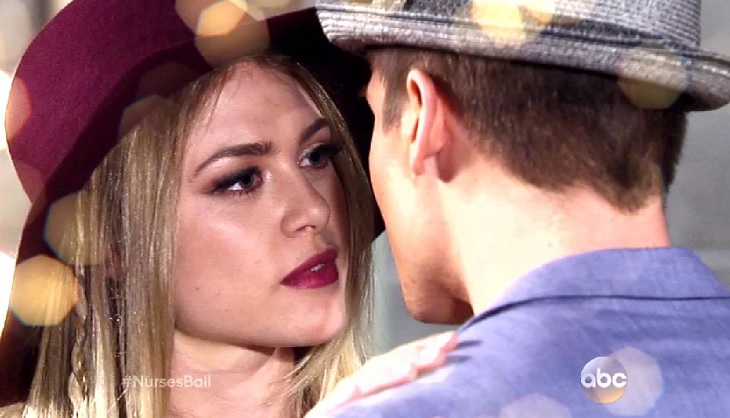 ‘General Hospital’ (GH) spoilers have released the Nurse’s Ball promotional video, and it looks like next Tuesday promises to be SEXIER THAN EVER.

Favorites Maxie (Kirsten Storms) and Sam (Kelly Monaco) are shown looking fabulous in black as they walk the Nurse’s Ball Red Carpet as is Jason (Billy Miller) but who is with Maxie? It doesn’t seem to be Nathan (Ryan Paevey)!  It also looks like Lucas Jones (Ryan Carnes) is looking both dapper and adorable with his mom Bobby (Jacklyn Zeman) on his arm.

A few red carpet entrances are sure to turn some heads. It appears Jordan (Vinessa Antoine) takes a break from her hot/cold interactions with Andre (Anthony Montgomery Anthony Montgomery) just long enough to be his date for the night. Also, Curtis’s (Donnell Turner) sweet talking ways appear to have worked on Valarie (Brytni Sarpy) as the two show up together. This public appearance should ruffle a few feathers; including Jordan and Andre’s.

The performances appear to include a combination of repeat performers as well as newbies. Emma (Brooklyn Rae Silzer) performs looking too cute for works dressed in white with wings.

New nurse Amy (Risa Dorken) must manage to stay out of Monica’s (Leslie Charleson) crossfire between now and next week because it looks like she’s been promoted from backstage duty to performer. She takes the stage alongside Lulu (Emme Rylan), Valerie, and Maxie (Kirsten Storms). The ladies appear to do a musical number looking foxy, dressed in all black with capes.

Things heat up with a sexy Dr. Griffin Munro (Matt Cohen) not looking very priestly as he works the stage while removing his jacket. Also, as to not disappoint, Magic Milo (Drew Cheetwood) is back with his group of hotties to tease all the ladies.

It looks like some of the drama is taking place off the stage also. Dillon (Robert Palmer Watkins) and Kiki (Hayley Erin) are shown finally going in for the first kiss. Could this mean trouble for Morgan (Bryan Craig), who is out of the hospital and shown alongside Micheal (Chad Duell) and Sonny (Maurice Benard)?

Also shown is engaged couple Lucas and Brad (Parry Shen) with Felix (Marc Anthony Samuel), and Bobby while toasting a happy occasion. Could this mean a happy ending for the two or is a disaster looming as some rumors suggest?

It appears the Nurses Ball is jam packed with performers and drama. Who are you most excited to see and who do you think should take a seat! How do you feel about the Dillon/Kiki kiss? Share your comments below and be sure to check back with Soap Opera Spy for more ‘General Hospital’ spoilers and news.

‘The Bold And The Beautiful’ Spoilers Wednesday May 18: Zende’s Heartfelt Apology to Nicole – Sasha Prepares Next Move – Brooke Reflects on Rick’s Grudge