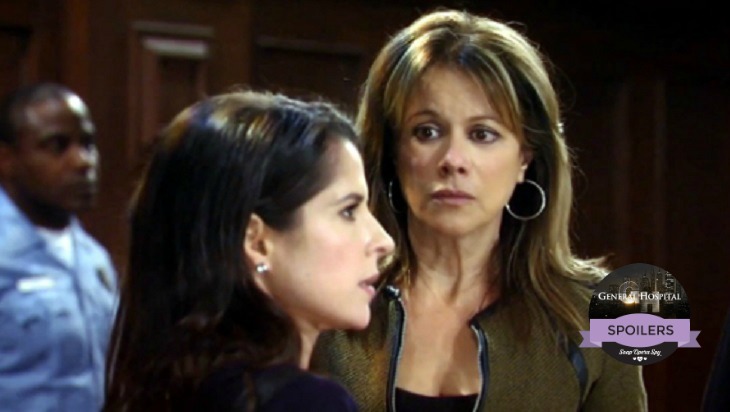 General Hospital Spoilers for Monday September 19, 2016 tease Maxie Jones (Kirsten Storms) is having a hard time with her fiancée, Detective Nathan West (Ryan Paevey) and when he shows up at Crimson, she assumes the worst. Nina Reeves (Michelle Stafford), the editor in chief of Crimson magazine comes out of her office and tells Maxie that “Jay” is there on official police business.

General Hospital’s Claudette “CJ” Boland (Bree Williamson) is still in hot pursuit of Dr. Griffin Munro (Matt Cohen), who really wants nothing to do with her since their fling many years earlier. He doesn’t want any more memories of her and tells her that he is reminded of her every day from the bullet, her ex-husband put in him during their affair. Griffin confronts Claudette and tells her to just tell him the truth. What is Claudette really after, does she want Griffin back or is Nathan her real goal?

As the biggest trial in recent General Hospital history is underway. Alexis Davis (Nancy Lee Grahn) is testifying and seems to be losing it more and more after every question. The judge orders a break and Police Commissioner Jordan Ashford (Vinessa Antione) confronts Alexis about being inebriated. Alexis insists that she has only had one small glass of wine before the trial.

Julian’s attorney, Scott Baldwin (Kin Shriner) is really badgering her on the witness stand to the point that her daughter, Samantha Morgan (Kelly Monaco) stands up to defend her mother; and tells the court that it is true, that her father tried to murder her mother. When Julian approaches Alexis, and grabs her as she passes out, Sam shoves him away and tells him to get his hands off her.

Even though they know that their deceased loved ones would hate it, Dr. Monica Quartermaine (Leslie Charleson) who has woken up and is alive thanks to Sabrina Santiago (Teresa Castillo), and her sister-in-law, Tracy Quartermaine (Jane Elliot) agree with PCPD and the hospital’s board and decide that General Hospital needs to be shut down until the serial killer is caught. What does that mean for all the staff currently at the hospital?

Related: ‘GH’ Head-Writers Reveal Why They Decided To Kill Off Sabrina Santiago

With General Hospital officially closed, where will they bring Alexis, and will blood work prove she was drugged? We know that D.A. Paul Hornsby (Richard Burgi) is being black mailed by Ava Jerome (Maura West) to exonerate her brother, Julian Jerome (William DeVry). Would it be out of the realm of possibility that since he is the General Hospital serial killer, that he may have gotten to Alexis too? The smirk on his face when she passed out in Julian’s arms, pretty much answers that question!

After leaving General Hospital and saying his final “goodbye” to Sabrina, Michael Corinthos (Chad Duell) goes to the Metro Court. Carly has no idea what has happened and gives Michael her blessing and that he should love her if he wants to love her. Michael coldly turns to her and tells her it doesn’t matter, that Sabrina is dead. Will Sabrina’s death turn Michael into a man no one will recognize?

Be sure to tune into ABC’s General Hospital on Monday, September 19, 2016 to catch up on all these stories and check Soap Opera Spy often for updates, news, rumors and spoilers!

‘Days Of Our Lives’ Spoilers: Romance Brewing Between Chad And Gabi?