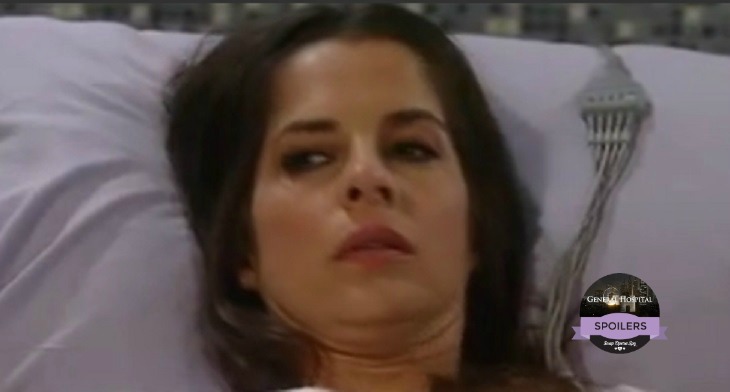 ‘General Hospital’ spoilers tease that Monday August 8 kicks off with Carly Corinthos (Laura Wright) reaffirming to her husband, Sonny Corinthos (Maurie Benard) that what she had said to her ex, Jasper “Jax” Jacks (Ingo Rademacher) about stopping the search for Josslyn’s mystery kidney donor is true. She is done with the search. Now we all know that Carly says a lot of things and then does something completely different. Do you think she is being sincere, and if she is, do you think Sonny will continue the search without her knowing?

We haven’t seen much of Bobbie Spencer (Jacklyn Zemen) lately, but she will be on screen Monday, sharing scenes with her ex-son-in-law, “Jax”. This could lead to something pretty bad, considering she is inviting him to her birthday party. A party that is promising to be a “must see” event, as secrets will be revealed and announcements will be made, leaving many guests reeling in shock and surprise.

Dr. Hamilton Finn (Michael Easton) shares his views with Nurse Elizabeth Webber (Rebecca Herbst) on who the GH serial killer is, and has no problems pointing his finger at Franco Baldwin (Roger Howarth). Liz doesn’t seem too impressed with his opinion of Franco, do you think she will stand behind Franco, or will she step back to wait and see how this all turns out? At the same time, you see Franco entering Sam Morgan’s (Kelly Monaco) room, offering to make things better. Is she his next target, or is he once again, in the right place at the wrong time?

‘General Hospital’ spoilers also tease that Michael (Chad Duell) and Morgan Corinthos (Bryan Craig) are having the same argument Morgan had recently with his girlfriend, Kiki Jerome (Hayley Erin). Morgan accuses Michael of speaking to Kiki about him and Michael tries to assure him that he never spoke to her about anything. Is Morgan really off his Bipolar medication or having a manic episode, or is he simply “happy” as he keeps stating to everyone?

Kiki seems to have her own hands full dealing with her mother, Ava Jerome’s (Maura West) insistence on her staying away from Morgan. What are Ava’s motives behind these demands? If it has to do with who is responsible for Kiki being shot a while back, Ava really isn’t in the position to place blame on anyone, is she?! Is it possible that Kiki will leave Morgan because of her mom, or will she leave him because of her feelings for Dillon? After finding out about the STD Darby has and knowing she could have given it to either one of these men, maybe Kiki will walk away from them entirely.

‘Days Of Our Lives’ News: ‘DOOL’ Stars Jen Lilley, James Lastovic, And Paige Searcy Starring In New Movie ‘Mommy I Didn’t Do It’