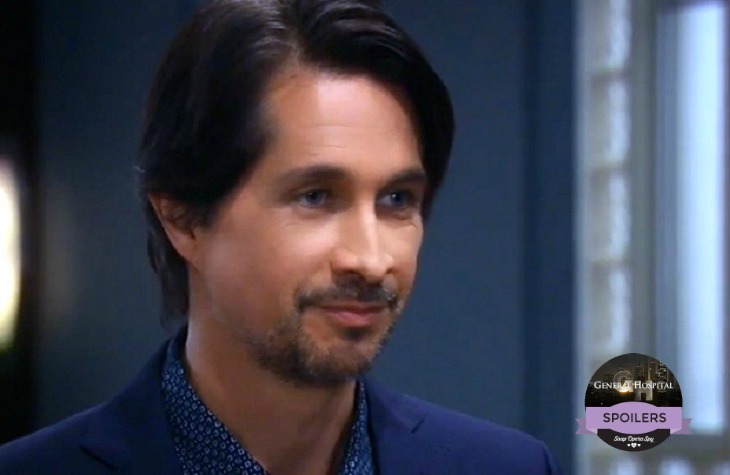 ‘General Hospital’ (GH) spoilers for May sweeps are coming out and it looks like next month will see big action in Port Charles. Here’s a look at some of the big events that will impact Jason, Sam, Dante, Lulu, Ava, Sonny, Carly and new guys Finn and Griffin.

We know the Nurse’s Ball is coming at the end of the month for May 24-26 and Lucy Coe [Lynn Herring], Milo Giambetti [Drew Cheetwood], Robin Scorpio [Kimberly McCullough] and Emma Drake [Brooklyn Rae Silzer] will return for the big event.

Also, the wedding of Brad Cooper [Parry Shen] and Lucas Jones [Ryan Carnes] will hit for sweeps. Sam Morgan [Kelly Monaco] and Jason Morgan [Billy Miller] kick off a dangerous adventure the night of the Nurse’s Ball – this is a big event once again for Jason – last year was a doozy if you recall.

Related: Kristina Gets New Love Interest Aaron – But Parker’s Still on Her Mind!

Liz Webber [Rebecca Herbst] and Franco [Roger Howarth] continue to grow closer in coming weeks, no doubt owing to Jake Spencer [Hudson West] but clearly they both need a friend since his relationship with Nina Clay [Michelle Stafford] continues to tank and Liz needs to get over Jason for good.

Dante Spencer [Dominic Zamprogna] and Lulu Spencer [Emme Rylan] make a big decision about the future and may decide to implant their last embryo. But did Helena Cassadine [Constance Towers] tamper with it because that empty envelope mystery is still lingering?

Sabrina Santiago [Teresa Castillo] is back with Michael Quartermaine [Chad Duell] for sweeps but things aren’t all hunky dory. Teresa Castillo has teased that Sabrina might come back without her baby – could this be the obstacle Michael and Sabrina face?

Maxie Jones [Kirsten Storms] can’t let Nathan West’s [Ryan Paevey] past with Claudette go and this will cause problems into May sweeps with their new engagement. Ava Jerome [Maura West] and Sonny Corinthos [Maurice Benard] will go another round over custody of baby Avery.

For those tired of the back and forth between Ava and Sonny, you’ll be happy to know that May sweeps will finally see this bitter battle come to an unexpected solution. Ava is also ready for romance in May and it could be Scotty Baldwin [Kin Shriner] she’s pairing with.

Anna Devane [Finola Hughes] will struggle to let Duke Lavery [Ian Buchanan] go so she can move on with her life and gets family time with her daughter and granddaughter during sweeps. Kiki Jerome [Hayley Erin] gets closer with Dillon Quartermaine [Robert P Watkins] as pals.

However, it’s Morgan Corinthos [Bryan Craig] who she wants romantically but if Morgan does something dumb, there might be an opening for Dillon to be more than a friend to Kiki. And we all know that Morgan always does something dumb.

Also, Hamilton Finn [Michael Easton] will get involved with a woman which distracts him from his work and to whom he opens up about his secrets. Griffin Munro [Matt Cohen] also has a past that will coming back to bite him in coming weeks.

There’s tons to see for May sweeps on General Hospital and we can’t wait for all the Port Charles action. Share your thoughts below on these spoilers and tune in to Soap Opera Spy every day for more ‘General Hospital’ spoilers, news, interviews and more.