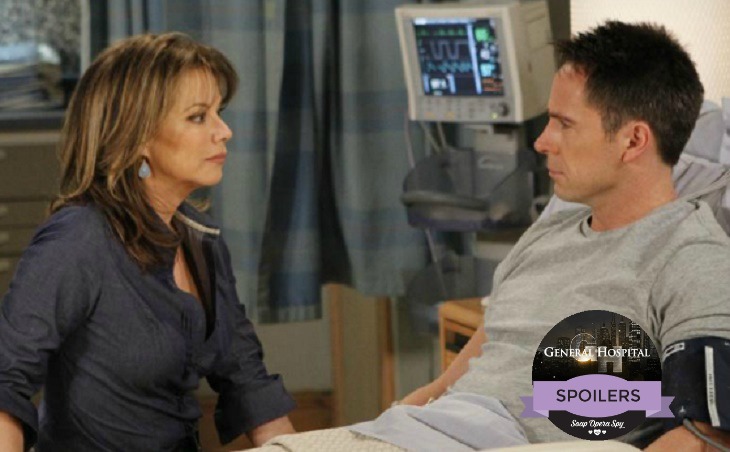 Over the past few weeks on General Hospital we have all witnessed Julian Jerome (William DeVry) milking his accident for all its worth. Now will he step it up a notch?

GH’s Julian Jerome has been using the hit and run by his estranged wife Alexis Davis (Nancy Lee Grahn) to his advantage.

Julian is an opportunist and sees the opportunity to win Alexis back. So, now he is basically blackmailing her with the fact that she was the one that ran him over, but how far will he go?

According to General Hospital spoilers Julian Jerome moves in with Alexis Davis. Julian does not care if he is manipulating her as long as there’s the possibility of winning her back he will do whatever it takes.

Kristina Davis (Lexi Ainsworth) moves out of her mom’s home, but it’s not going to stay empty for long. Julian moves in with Alexis in hopes for a reunion for the two.

Julian also thinks that since Alexis has been having a rough time lately that he can be there to help her through some of that.

Related: Anna Struggles With Past – Julexis Shares A Moment – Finn Takes A Gamble On Hayden

We have all learned that someone is pulling the strings with Julian, so will this come to backfire on him and is he actually putting Alexis in danger? It appears that some of Julian’s past actions may be connected to the mysterious person we have been seeing lately, but we will all continue to learn more about that as the show goes on.

Recent GH spoilers revealed that “Oliver Jessup” is actually Julian’s sister Olivia Jerome [Tanja Wright” and she has a serious ave to grind with her brother.  Will Alexis get caught in the crossfire?

Alexis will grow tired of Julian’s meddling, so how long will it last as him being her roommate? Do you think she will end up admitting to what she’s done? She definitely needs to get some help real soon and get her life back on track.

Stay tuned to ABC’s General Hospital to see what the future holds for Alexis and Julian. Don’t forget to check often with Soap Opera Spy for all your latest General Hospital spoilers, news, updates, and much more.