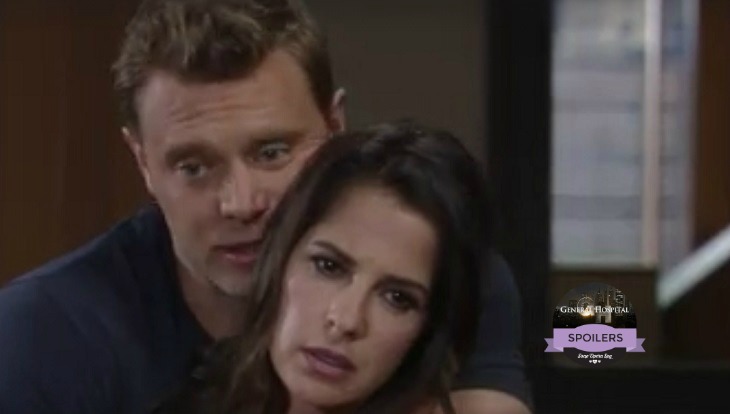 General Hospital seems to be slowly filling up with the survivors from Cassadine Island, Greece with some mysterious symptoms. All of whom are waiting for results on various tests, but no one could be more anxious that Sam Morgan (Kelly Monaco). Sam has been released from the hospital with some surprising news, her and her ex-husband, Jason Morgan (Billy Miller) are expecting their second child together.

It’s news she has been keeping to herself, and not even sharing with Jason, pending results of some other medical tests; something Elizabeth Webber (Rebecca Herbst) suggests isn’t the smartest idea. Sam cannot help but laugh at the irony of Liz telling her to be honest. Liz is making a valid point and Sam really needs to figure things out.

Fans are in a bit of an uproar over Liz being involved in this story, and why Sam would confide in her since their relationship has been more negative than positive, but the truth is, these women will be in each other’s lives for many years to come, their children share the same father! Sam didn’t choose for Liz to find out, but now that she does, people are surprised to see that Liz is being supportive and helpful to Sam. After discussing it with Liz, Sam still decides she is going to keep Jason in the dark, at least for now.

Sam and Jason have not had much happiness in their lives in a very long time, so it makes sense that she would hide it from him for the time being, but Jason, as it turns out, knows Sam better than she thinks and he knows something is up. General Hospital spoilers tease that when Jason is released from the hospital, he starts questioning Sam, which leads to her admitting she is pregnant, but that there might be a problem. After the revelation, they both are left impatiently waiting for answers.

Jason, however, does not wait for the call to come in and  he does something to prove to Sam than he is in this for the long haul, no matter what life has in store. Their love for one another cannot get any deeper, so what does he do, does he propose to her? News finally comes in, but is it going to be joyful news or something that will force them to once again, brace for the worst? Will JaSam survive if it turns out to be another heartbreak?

‘The Bold And The Beautiful’ News: Adrienne Frantz Shares Adorable New Photos Of Baby Amelie – She’s Getting So Big!