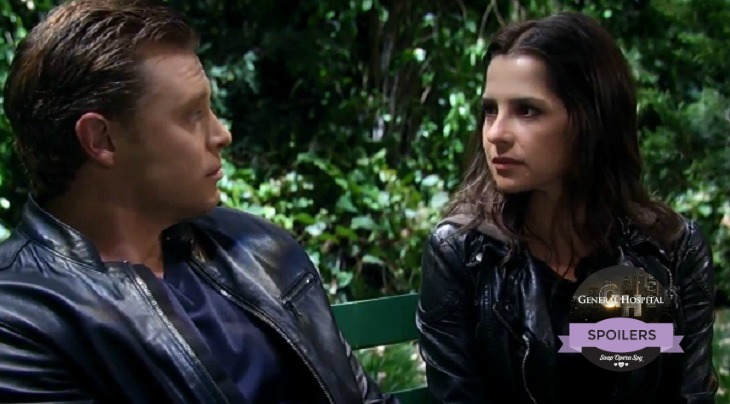 We have all witnessed fans favorite, Sam Morgan (Kelly Monaco)recently having some fainting spells. GH fans everywhere quickly jumped to the conclusion that she was pregnant, as awesome as that would be it may not really be the case. General Hospital spoilers tease that after losing consciousness several times, Sam decides to seek treatment and she is definitely in for a shock of her life when she receives the diagnosis.

According to Soap Opera Digest magazine “Sam is hoping that there’s a simple explanation for her fainting spells. It could be the result of the conditions that Sam and Jason (Billy Miller) have been traveling under- they haven’t eaten, they’ve barely slept, they’ve been on the run because Jason was a wanted man.” Could that be really all it is?

GH spoilers tease that Sam Morgan goes to the hospital to figure out what is wrong with her where she is seen by Doctor Finn. Could it be that she has picked up an infectious disease while traveling and that’s the reason she is being examined by Doctor Finn? Let’s hope not! Also, the fact of Doctor Finn resembling past character Silas Clay is never mentioned. The writers feel that Doctor Finn is now an established character and there is no need.

Meanwhile, Jake (Hudson West) is filling in Jason on how much time his mother Elizabeth (Rebecca Herbst) has been spending with Franco (Roger Howarth). When Jason goes to Elizabeth about his concerns of Franco, she makes it clear that his intervention is not appreciated. Liz suggests to Jason that he should be worried about Sam and not her, cluing him in about her hospital visit.

Related: The Man Behind Jason Morgan and Y&R’s Billy Abbott – Which Role Do You Prefer?

GH spoilers also tease that Jason will be rushing to be by Sam’s side and we will all soon know what it is that is causing these fainting spells. Jason and Sam better known as JaSam are one of fans favorite couples and everyone is been hoping that they would get more screen time, well it looks like that is gonna happen GH fans! So don’t forget to tune in.

‘The Young And The Restless’ Spoilers: Jill Blackmails Phyllis, Orders Her Stay Away From Billy – Will Phyllis Stay True To Jack?

‘The Bold and the Beautiful’ Spoilers: Ridge Asks Katie To Go After Forrester Shares In Divorce Settlement- Ridge and Steffy Plot to Separate Eric and Quinn