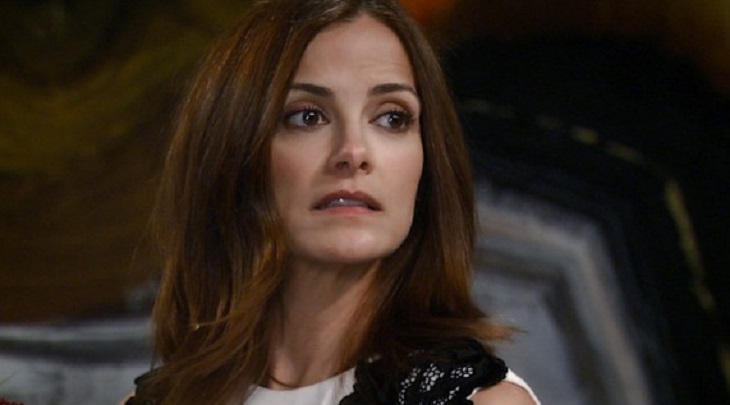 ‘General Hospital’ (GH) spoilers reveal that Nikolas Cassadine [Tyler Christopher] will soon push Hayden Barnes aka Rachel Berlin [Rebecca Budig] too hard and she will snap. Hayden is cornered and that’s when people play hardball – and it looks like blackmail is all Hayden has left.

As of now, Nikolas thinks that he’s got all the leverage. He got Hayden to sign a prenuptial agreement before they married, he caught her with the shady legal documents, and he decided NOT to change his will to award her anything.

Nikolas thinks he can do what he wants and he’s mad about the Rachel Berlin reveal. But, to be fair, Nikolas just told Hayden recently that she could tell him her backstory in her own time – and then time ran out and she’s been outed.

But does Nikolas really have the right to rail at her? He and Liz Webber [Rebecca Herbst] lied about Jake Doe’s identity for months. Plus – and this is the most important factor – Nikolas tried to have Hayden killed – and that’s her trump card.

Nikolas will likely give Hayden some sort of ultimatum soon – he may tell her she has to leave Wyndemere penniless or tell her that they’ve over and he’s going to divorce her – and that will be what makes Hayden pull out the only card she has left – but it’s a trump card.

Hayden will reveal that she knows Nikolas had her shot and that will stun him – but surely he’ll deny it and say she has no proof – except that she does. Curtis Ashford [Donnell Turner] did the leg work and got the bullet from the wall that proves Shawn Butler [Sean Blakemore] didn’t shoot her.

She will make the reveal and then use this information to blackmail Nikolas. We have to wonder also whether Hayden has any idea that both Liz and Laura also knew that Nik tried to have her killed. If Hayden figures out that both know, she can rope them into the leverage play.

It’s bad enough if Hayden threatens Nikolas with jail, but to threaten his BFF and mom would be too much. But what will Hayden demand with the blackmail? Will she force Nik to stay married to her? Will Hayden demand that he sign the legal papers she had drawn up that give her ELQ?

Related: Sonya Eddy To Appear On Primetime Show ‘My Crazy Ex-Girlfriend’ On The CW

This is very bad for Nikolas – and things will soon get worse. Tracy Quartermaine [Jane Elliot] will be back on her feet in coming days ready to pursue the case against Nikolas. She’ll have Ned Ashton [Wally Kurth] with her as well to reclaim the ELQ shares Nik took via blackmail.

But will Nikolas transferring ELQ to his vengeful wife block the Qs efforts to take the family business back? Will Tracy reveal her scheme with Hayden (which is dead now) further convincing Nikolas that Hayden was never trustworthy?

Nikolas is in major trouble no matter how this plays out. Since Helena Cassadine [Constance Towers] cut him out of the will, ELQ is his financial safety net. With that under Hayden’s control, Nikolas may have to choose to live under Hayden’s thumb or be broke.

What do you think GH fans? What will Hayden demand when she makes her blackmail play? Can she be stopped? Will Hayden end up with ELQ, Wyndemere, and total control over a big chunk of Port Charles power?

Share your comments below and come back to Soap Opera Spy often for more ‘General Hospital’ spoilers and news.