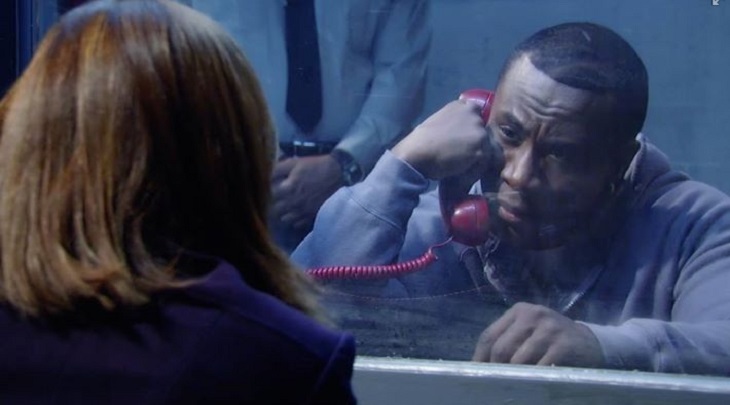 ‘General Hospital’ spoilers tease that Sean Blakemore is headed back to the ABC soap as Sonny’s right hand man Shawn Butler.  According to ‘GH’ spoilers, Sean will make his appearance on Monday April 4, exactly one week away!  Of course, Shawn is still sitting in Pentonville, so it looks like another person will be visiting him while he is in jail.

So far ‘General Hospital’ spoilers regarding Sean Blakemore’s return to the ABC soap next month are pretty scarce, but according to Soap Opera Digest, his return will be brief and for only one day.  Rumors have been floating around that the ‘GH’ fan favorite could be sprung from jail very soon – but it doesn’t look like the week of April 4 will be the week that happens, sadly.

‘General Hospital’ spoilers indicate that Hayden Barnes (Rebecca Buddig) will be blackmailing her hubby Nikolas Cassadine (Tyler Christopher) this week on the ABC soap for the shooting that nearly killed her.  Shawn Butler is currently sitting in jail because he plead guilty to shooting Hayden.

If the truth is coming out about the shooting, then that means that we may see Shawn Butler walking around Port Charles as a free man, sooner than we thought.  However, it is worth noting that Blakemore just booked a primetime gig on the Lifetime series ‘Devious Maids,’ so he may not be interested in coming back to ‘General Hospital’ full time, the actor has also been busy working on CSI: Cyber as well.

So ‘GH‘ fans, are you as excited as we are to see Shawn Butler back on our television screens?  Do you think that Blakemore’s character will be a free man soon?  Share your thoughts and theories in the comments below!

‘General Hospital’ Spoilers: Can Scotty Save Ava? Former DA Moves In With Lady Mob Boss To Protect Her