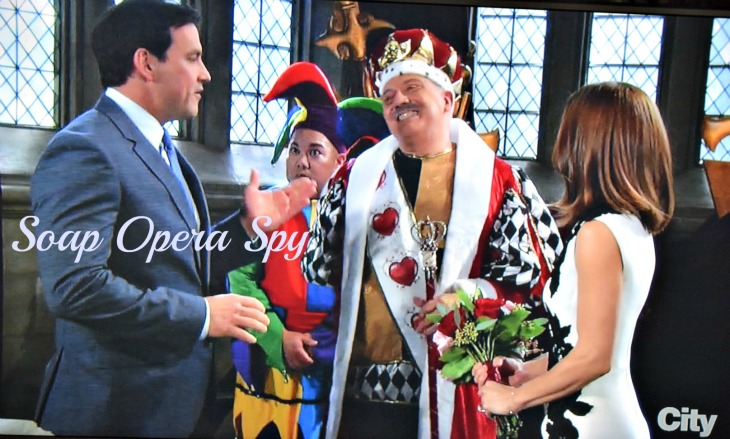 ‘General Hospital’ (GH) spoilers for Thursday, February 4 reveal that a hot date will cool off, a new marriage may be in trouble already, and divorce news spreads like wildfire around Port Charles. Check out these spoilers to get you ready for tomorrow’s show.

Kiki Jerome [Hayley Erin] is ready to heat things up with Morgan Corinthos [Bryan Craig] but he unexpectedly backs off. Are Morgan’s meds messing up his romantic opportunity with Kiki? Will her feelings be hurt?

Lulu Spencer [Emme Rylan] breaks the divorce news to Dillon Quartermaine [Robert Palmer Watkins] and GH spoilers indicate that Dillon is going to be her rock while she works through her sadness over her divorce.

At the Floating Rib, Dante Falconeri [Dominic Zamprogna] also breaks the divorce news to Nathan West [Ryan Paevey] and Maxie Jones [Kirsten Storms] who will be surprised. Maxie knew about the papers, but may be stunned the duo signed them.

Also at The Rib, Curtis [Donnell Turner] flirts up a reluctant Valerie Spencer [Brytni Sarpi] who is cool at first but will warm up to the handsome former cop. Dante will see this and isn’t happy that she’s smiling at a new man. Dante needs to get a grip!

Cameron Spencer [Michael Leone] comes to see Liz Webber [Rebecca Herbst] at the hospital and check on his brother Jake Spencer [James Nigbor]. She’s happy to see him, but later Liz and Jason Morgan [Billy Miller] will find out about some complications.

Sam Morgan [Kelly Monaco] is still stuck in the basement and a gas leak is making her hallucinate that Jason has come for her. Poor Sam is so messed up from the concussion and fumes that she thinks her honey is there. Is she reaching for a Jason hallucination when she sets off a fire?

Hayden Barnes [Rebecca Budig] is now Mrs Cassadine, but her brand new marriage may already be in jeopardy. A yet unseen man calls out to her as “Rachel” which is the same name Tracy Quartermaine [Jane Elliot] called her before in a blackmail session.

Hayden has to try and get rid of the guy before Nikolas Cassadine [Tyler Christopher] comes back but it looks like it’s too late and Nik will hear something that will have him asking some very pointed questions of his new bride.

Hayden will play dumb, but Nikolas isn’t buying it. Any chance the guy is hot new doc Griffin Munro [Matt Cohen]? We only saw a glimpse of his profile, but he fits the bill and is rumored to have a tie to someone in Port Chuck. Could it be?

Share your comments below on these spoilers for the Thursday, February 4 GH episode and check back with Soap Opera Spy often for more ‘General Hospital’ spoilers and news.

‘General Hospital’ News: Michael Easton Thanks Fans For Helping Him Return To ‘GH’