‘General Hospital’ Spoilers: Hayden’s Mom Returns To Port Charles – Will She Make Amends Before It Is Too Late? 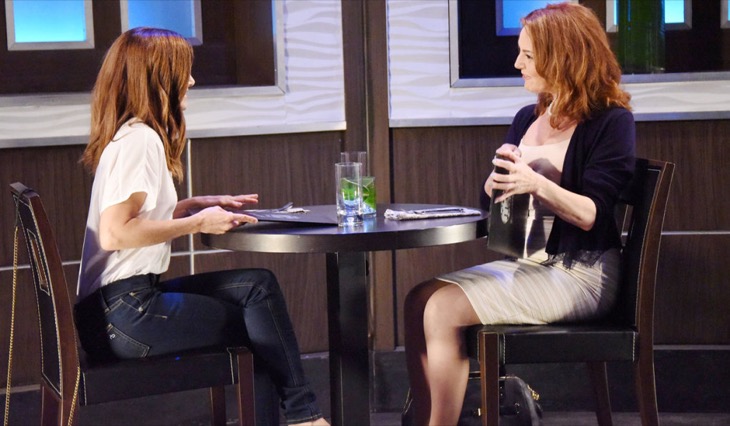 On, “General Hospital,” will tragic Hayden Barnes (Rebecca Budig) make peace with her imprisoned mom before she succumbs to her terminal illness? GH fans don’t have long to wait to find out because Robin Riker (Naomi) returns to the canvas December 21.

Hayden’s stance toward her neglectful mother Naomi softened a bit when her mother took the fall for Hayden’s diamond theft. But the two never got the chance to bond because Naomi was locked away as soon as Hayden was released.

Will the estranged mother-daughter duo make amends before young Hayden dies a horrible death? Or will Dr. Hamilton Finn (Michael Easton) save the day and make their reunion a celebration?

GH fans know that Finn and Hayden were involved in a serious flirtation prior to her illness. In fact, it was the good doctor who “gifted” Hayden with her disease. He has been fighting the same incurable virus, and was close to a cure when Hayden stumbled into his lab.

Related: Vanessa Marcil Responds To Rumors – Is Brenda Headed Back To Port Charles?

During her visit she became contaminated with the virus, and while Finn has clung to life for a quite a while, Hayden’s death spiral has been much steeper. She’s now on her deathbed, which is presumably why her mother was allowed to leave prison and stay through the holidays!

However, there is a glimmer of hope for the terminally-ill, star-crossed lovers. While feeding his lizard, Roxy, Finn had an epiphany about finding the cure. Wow, all those long hours he labored away in the lab while his lizard had the answer all along!

What do you think GH fans, is Finn finally going to find the elusive cure? And if he so, can Hayden survive long enough to receive the miracle treatment? Thus far she’s been in and out of consciousness, and thinks she’s conversing with her dad when she talks with Finn!

Be sure to let us know how you think Hayden and Naomi’s reunion will turn out in the comments section below!

‘The Young and the Restless’ RUMOR: With The Change In Y&R Writers – Many Characters Will Be Headed In Different Directions