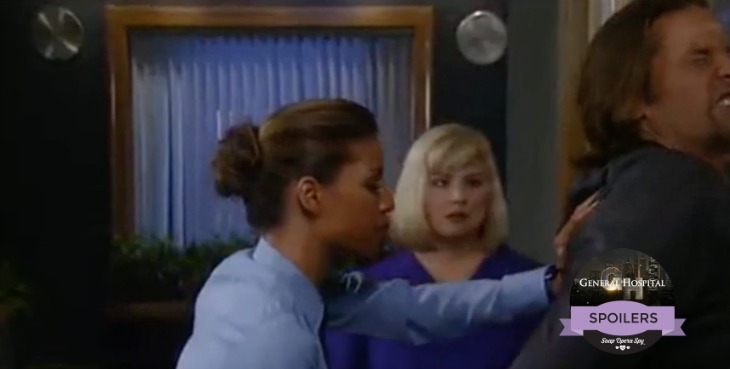 “General Hospital” spoilers for Friday, July 29 hint that Maxie wonders if Claudette made a move on Nathan, the exes end up stranded together, Valerie suspects Franco of violence, Liz is troubled, and Curtis has a showdown with Jordan – plus there’s a plane crash coming in Greece!

At Maxie Jones’ [Molly Burnett] apartment, she finds the broken frame in the garbage along with the wedding photo of Nathan West [Ryan Paevey] and Claudette Bolland [Bree Williamson]. Maxie wonders aloud if Claudette was at her place with Nathan.

Maxie also finds Nathan’s phone left behind. Too bad he didn’t bring it along when he offered Claudette a ride to the airport because GH spoilers hint the two will get stranded. Claudette says she gets that he’s mad and it’s all her fault for Nathan giving her a ride.

Curtis Ashford [Donnell Turner] gets into Jordan Ashford’s [Vinessa Antoine] face and tells her there’s nothing he needs from her ever again. What prompted this tense conversation? Is this about TJ Ashford [Tequan Richmond] or something else?

Griffin Munro [Matt Cohen] approaches Liz Webber [Rebecca Herbst] at GH and asks if she’s troubled and whether her thoughts are stuck on Franco [Roger Howarth]. Griffin is correct. Liz is worried about her looming first date with Franco and what that means.

Liz is concerned that things will be weird and what Franco might have planned for her and then things get worse. Valerie Spencer [Brytni Sarpy] slams Franco against a patient’s door and seems to be handcuffing him, but why?

Nurse Amy Driscoll [Risa Dorken] is also there. Is this about the patient that Amy finds and calls for code blue? Is Franco suspected of foul play? Will this incident cause Liz to second guess herself and further regret her promise to go on a date with the reformed killer?

What do you think GH fans? Will everyone survive the Greek plane crash? Has the GH serial killer struck again? Share your comments and tune into Soap Opera Spy for all the latest General Hospital spoilers.

‘The Young And The Restless’ Interview: Jason Thompson And Peter Bergman Dish On Billy And Phyllis Affair And The Big Reveal