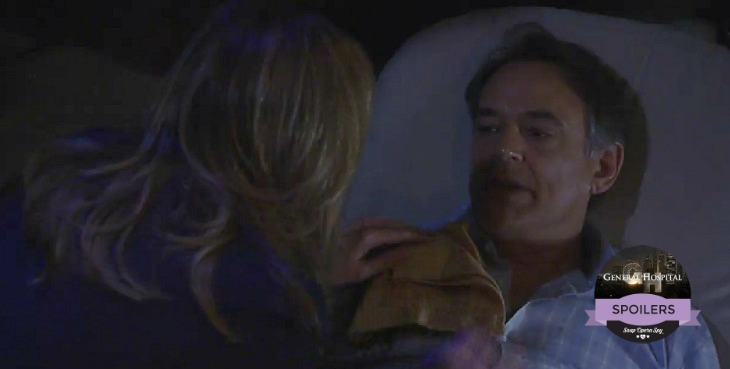 At the court house, after Julian Jerome’s [William deVry] arraignment, Sonny Corinthos [Maurice Benard] has some harsh words for Alexis Davis [Nancy Lee Grahn]. He asks why she didn’t tell him that Parker Forsyth [Ashley Johnson] was a woman.

Related: Is the Skeleton that Lulu found Luke? VOTE!

Will Alexis claim it was Kristina Corinthos’ [Lexi Ainsworth] secret to tell, not hers? Kristina is having a bad day and cries to Aaron Roland [John DeLuca]. Is this because she found the letter from Parker breaking things off? Will Aaron be angry with her?

Is Claudette fired? Later, Claudette stops by to tell Nathan West [Ryan Paevey] goodbye. Is she leaving town after the Crimson debacle? Nathan offers to give Claudette a ride and that puts them in close quarters. Is Claudette really giving up that easily?

On the island, Kevin Collins [Jon Lindström] tells Laura Spencer [Genie Francis] that he thinks his chances of survival are not good. Laura encourages him to hang on. Lulu Spencer [Emme Rylan] and Dante Falconeri [Dominic Zamprogna] go on high alert when they hear a noise.

Related: Will Maxie And Nathan Discover Claudette’s Secret Before She Destroys Them?

Is it some of Valentin Cassadine’s [James Patrick Stuart] men or is it a friendly face? Jason Morgan [Billy Miller] and Sam Morgan [Kelly Monaco] show up and tell them they may have a way to get off the island. GH spoilers also tease that Sam and Jason will make a dangerous discovery.

Be sure not to miss the Thursday, July 28 episode of GH and tune in to Soap Opera Spy to keep up with the latest General Hospital spoilers, news, polls and more.

‘The Young And The Restless’ Spoilers: Nikki And Victor Find A Sweet Spot In Their Marriage, Will They Grow Old Together?