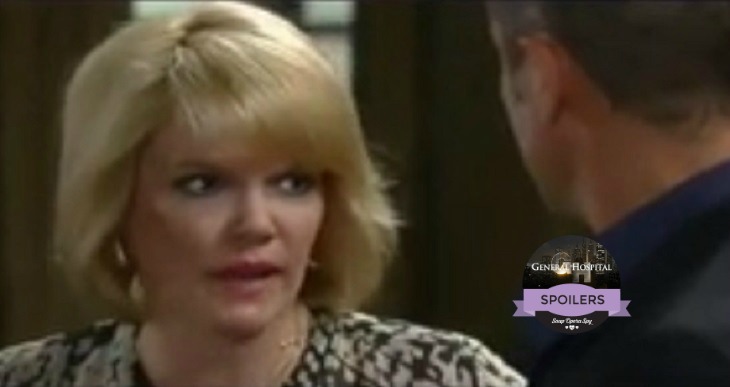 ‘General Hospital’ (GH) spoilers for Friday, June 17 reveal that Curtis gets sexy, Maxie and Nathan have a serious talk, Jason and Sam embark on a manhunt, Ava is irritated to be the victim of a crime, and an arrest is made in the Carlos killing case.

Curtis Ashford [Donnell Turner] shows off some of his assets but says if they want to see more, they need to offer up some money. It looks like Curtis is at the Crimson offices and so he’s probably talking to Nina Clay [Michelle Stafford].

GH spoilers tease that she’s going to hire him soon, but for what? Is that why he’s taking off his clothes? Maxie Jones [Kirsten Storms] talks to Nathan West [Ryan Paevey] and asks if he still wants to marry her. Nathan does but Maxie is unsure.

Jason Morgan [Billy Miller] and Sam Morgan [Kelly Monaco] need to get Nikolas Cassadine [Tyler Christopher] back to Port Charles alive to clear Jason’s name. The Morgans head to London looking for Nik and it looks like they find the hotel.

Too bad Nikolas and Ava Jerome [Maura West] aren’t there. Ava complains to a guy that she’s going to call the cops because he kidnapped her and Nikolas. Who took them? Is it Huxley Lynch [Trent Dawson]? Most likely since he was determined.

Paul Hornsby [Richard Burgi] and Anna Devane [Finola Hughes] talk about the Carlos Rivera [Jeffrey V Parise] case and Sonny Corinthos’ [Maurice Benard] interest in it. Anna is confident that Sonny will put a stop to something they’re concerned about.

Sonny goes to see Julian Jerome [William deVry] and Alexis Davis [Nancy L Grahn] to crow over Julian getting what’s coming to him. He has no sympathy and Sonny warns Alexis about the dark path she and Julian are on.

General Hospital spoilers tease that results are back on the Cassadine dagger testing and an arrest warrant will be issued. Nathan is poised to make the arrest, but will it be Julian that ends up in cuffs? Or Alexis? GH spoilers tease the arrest is a shocker!