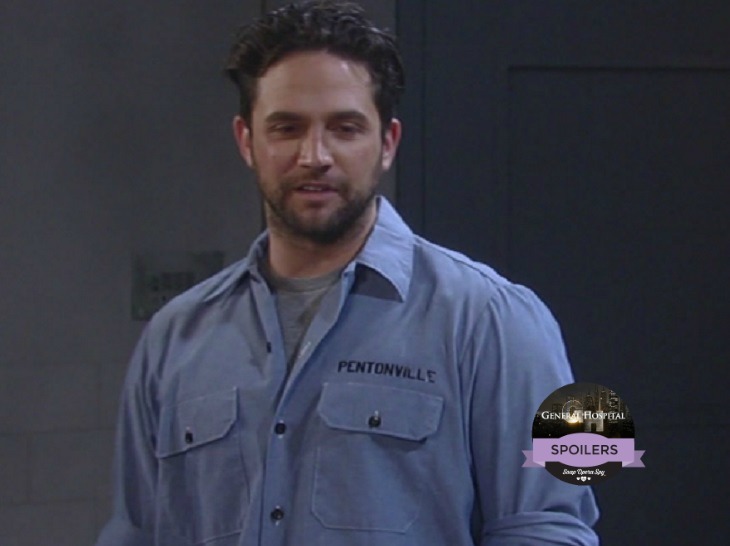 ‘General Hospital‘ spoilers tease that Johnny Zacchara [Brandon Barash] has gone and gotten himself arrested… yet again! Which means, sadly, his limited run on General Hospital has come to an end once again? How tragically sad! I really like Johnny, in spite of his being the son of the one-time mobster, Anthony Zacchara [Bruce Weitz (of Hill Street Blues)], and brother to the late Claudia Zacchara [Sarah Brown (also played Carly Corinthos)].

When Johnny finds himself under arrest this week, that’s the last we’ll see of him, and our dashing actor [Brandon Barash], unless General Hospital decides to have him escape from prison and once again, cause havoc and mayhem in Port Charles, as well as hearts to flutter among his fans, someday soon. I just love it when Johnny Z’s in Port Charles!

The sad thing about his arrest is, it will bring his current story to a close after he kidnaps Valerie Spencer [Brytni Sarpy] and leaves her in a burning cabin. The cops will eventually catch up with him on Tuesday, and will, without preamble, cart the fugitive off to Pentonville where he belongs.

One of the many reasons I love to watch Johnny, and I’m hoping many fans of the show love him too, is he always creates havoc, somehow, and it almost always involves either Lulu Falconeri [Emme Rylan], or Maxie Jones [Kristin Storm-Barash (married to Brandon in real life)], and the scenes are usually chaotic and funny and always pull the fans in… because “Johnny’s back”! YAY!

However, this time Johnny was used as the way and a means to move the Dante/Lulu/Valerie triangle further along and also as a way to better showcase Lulu’s flaws in their worst ways.  This reporter is really wishing that ABC / GH would bring Johnny back; and if they can, at least make it a semi-permanent or recurring role next time.

So, my dears, until next time, this is Tori Penndragon heading off to the ER to get a gander at our new Dr. Munro!

“Days of Our Lives” Poll: Which Ex-Husband Does Belle Belong With – Philip Or Shawn? Vote Now!