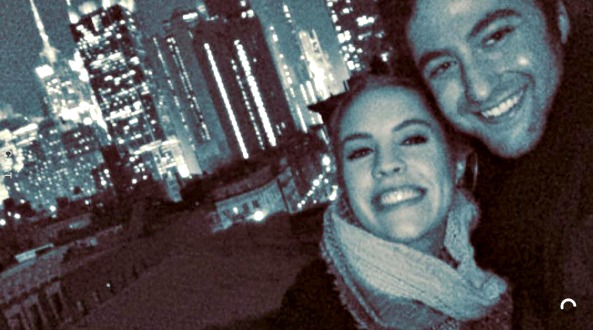 Kristen Alderson played Kiki Jerome on the popular Daytime Soap “General Hospital.”  In February 2015 Kristen walked away from “General Hospital” to explore other options in life. Checking in with Kristen it looks like she is having a lot of fun.  After Kristen posted several photos on her social media accounts fans are speculating Kristen may have a new man in her life? A recent photo posted on Instagram that hints that there is a possibility Kristen is dating “America’s Got Talent” contestant Josh Page or maybe they are just friends?

Kristen ended her relationship with “GH” co-star Chad Duell [Michael Corinthos] last year after the actress left the daytime drama. Kristen hasn’t made a public acknowledgement of a new boyfriend but the couple certainly seems to be having a lot of fun together.

One photo turned up on Josh’s Instagram account and Kristen is tagged in it. The selfie shows the couple bundled up with what appears to be New York City as the backdrop. Kristen reportedly moved back to Philadelphia from Los Angeles following the breakup with Duell.

The snapshot on Josh’s Instagram account is captioned, “My fav view with the one and only @krisalderson.”

Fans may be jumping to conclusions, Josh Page and Kristen Alderson may be just platonic friends. Posting photos on social media doesn’t mean the two are dating.  Just a day or so ago Kristen posted a video on Instagram – it’s also on Vine – and she is lip-synching with Josh, “If you like having secret little rendezvous.”

If Kristen Alderson and Josh Page aren’t dating they sure are having a lot of fun! Stick with Soap Opera Spy for updates on the possibility there is a relationship developing here!

‘The Young and The Restless’ Spoilers – Adam Kidnapped – Who Has Him and What Will it Take to Get Him Back?