‘General Hospital’ POLL: Who Should Get Custody Of Teddy? VOTE! 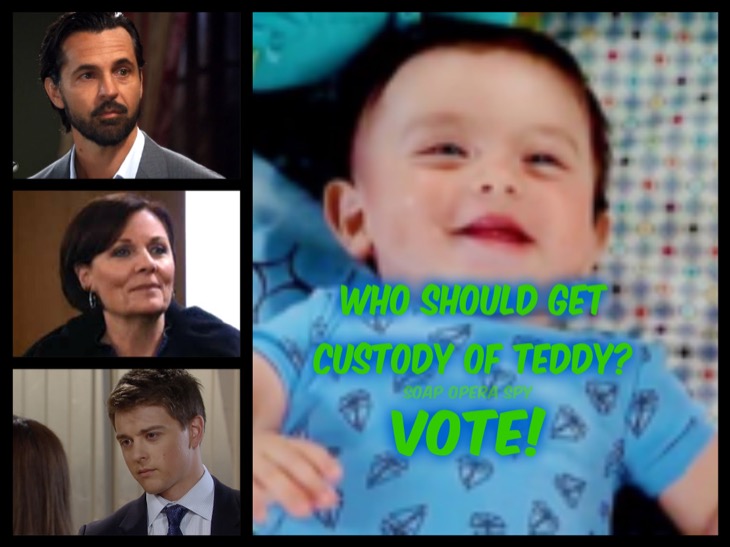 ABC Spoilers reveal that Sabrina Santiago (Teresa Castillo) died at the hands of the General Hospital killer Paul Hornsby (Richard Burgi). Poor Sabrina, just when she was so excited about starting back to work at GH and her future with Michael Corinthos (Chad Duell) and baby Teddy was starting to look bright; she is strangled by the murderous District Attorney after discovering he tried to kill Monica Quartermaine (Leslie Charleson). She will leave behind her precious baby Teddy and a heartbroken Michael.

Sabrina Santiago came to Port Charles in September 2012. She was a young very nerdy student nurse who developed a crush on Dr. Patrick Drake (Jason Thompson). She was the ugly duckling who turned into the beautiful swan. Dr. Drake fell in love with her thinking the love of his life Robin Scorpio Drake (Kimberley McCullough) was dead. Patrick and Sabrina planned to be married and as fate would have it, on their wedding day Robin appeared. Turns out she was not so dead after all. Unfortunately for Sabrina, Patrick chose to stay with his wife and Sabrina was alone once again. Fast forward to last year, Sabrina started dating Michael and fell in love; only to be dumped again when Michael discovered Sabrina was lying to him about the baby she was carrying. After running away with the fugitive Carlos Rivera (Jeffery Parise) and giving birth to her baby on the run, she found her way back to Port Charles and Michael.

Now that Sabrina is dead, who will care for Baby Teddy? Three possibilities come to mind:

General Hospital Spoilers tell us Michael will be devastated over Sabrina’s death. He has come to love baby Teddy and would not want to give him up. After all Michael has been like a father to him these past few months. Michael would make a great dad and this would be familiar territory for him as his step father Sonny Corinthos (Maurice Benard) raised him as his own too. Michael is kind and loving and Teddy is already used to being with him.

Sabrina had Teddy smuggled out of Puerto Rico and taken back to Port Charles after she ran away with Carlos. He was found by Tracy on the door steps of the Quartermaine mansion. Tracy immediately fell in love with him; naming him Edward after her father. She immediately obtained a court order naming her as his legal guardian and foster mother. Tracy and Sabrina were good friends and she will surely want to keep Teddy for herself. Do we really know if the court order is still in force? As a Quartermanie she could claim rights to him as his legal guardian and win in a court battle.

The obvious choice, since he is Teddy’s only living relative. But what do we really know about Dr. Rivera except he is the twin brother of the now-departed Carlos Rivera. Recent spoilers have teased that Michael was not too pleased to have Dr. Joe in town hanging around Sabrina and Baby Teddy. We know that he dated Sabrina back in Puerto Rico even before Carlos. In recent weeks we have even seen him trying to get closer to Sabrina and baby Teddy by claiming his need to be close to his brother’s child. This would be his perfect opportunity to gain custody of his nephew. But does he really have the baby’s best interest at heart? Does he love Teddy? Now that Sabrina is out of the picture, will he still be interested in being a part of this baby’s life.

Three people, one baby. Who should have the right to raise Teddy? Who would be the best choice? There is sure to be a battle for this little boy in the coming weeks. Please vote in our poll.

‘The Young and The Restless’ Spoilers: Jack Abbott Not Taking The High Road Billy And Phyllis Better Watch Out