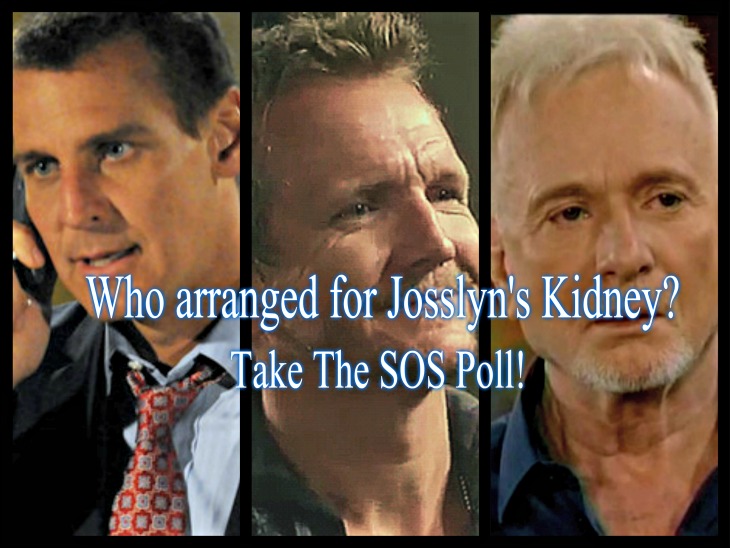 ‘General Hospital’ (GH) spoilers reveal that Josslyn Jacks’ [Eden McCoy] kidney mystery just got a whole lot twistier with the revelation that it was NOT Helena Cassadine [Constance Towers] that provided the kidney and is running this scheme. So if not Helena, who’s the mastermind behind the kidney plot? Read these facts then take the Soap Opera Spy poll.

Here are the few facts we know about the transplant mystery:

Jax is an obvious choice because he would have done absolutely anything to save his daughter Josslyn’s life and he had the money, power, and influence to obtain a black market kidney to save his daughter. He could have paid off Ramona (the transplant coordinator) and developed a cover story.

We know Jax is coming to Port Charles soon and perhaps he’s going to show up to try and cover up his involvement with the kidney mystery so that Carly Corinthos [Laura Wright] won’t find out what extremes he went to in order to save their daughter’s life.

Jerry might have been masterminding the kidney transplant for two reasons. First, he could have genuinely wanted to save his niece Josslyn’s life. Second, he may have been tasked with facilitating the kidnapping of Jake on behalf of Helena since he often works with her.

Jerry could have been the “mastermind” but really working on an overarching agenda for Helena. We know he’s alive and well and could have slipped out of custody after Anna Devane [Finola Hughes] had him arrested on Cassadine Island. He’s a solid candidate to do anything devilish.

Since Luke was the one who ran down Jake and “killed” the kid – at least as far as we knew back when it happened – perhaps Luke orchestrated the kidney donation to try and make up, in part, for what he did to Jake. It could have been a karmic payback in his mind.

Luke could have easily gone to one of his underworld contacts to find a black market kidney for Josslyn if he discovered that Jake wasn’t a match for her because he was trying to make Jake’s “death” matter in some small way and because he was feeling horribly guilty.

We know it’s not Helena, not Sonny Corinthos [Maurice Benard], not a Quartermaine. We have to strike off people with money and connections that could not have been involved to narrow the list. Sonny wouldn’t be pursuing the mystery if he had done it.

However, GH could be throwing a curve ball. This could be someone back from the dead, some new criminal (or enemy of current character) that they’ve created and are now inventing history for… could be anyone random that has no logical ties to the current characters or known history of GH.

What do you think GH fans? Who is behind the kidney plot? Is it someone who simply wanted to help Josslyn? Or is it someone who wanted to facilitate Jake’s kidnapping? Or could both have been motivations? Hopefully, we’ll find out soon – this mystery is unfolding far too slowly!