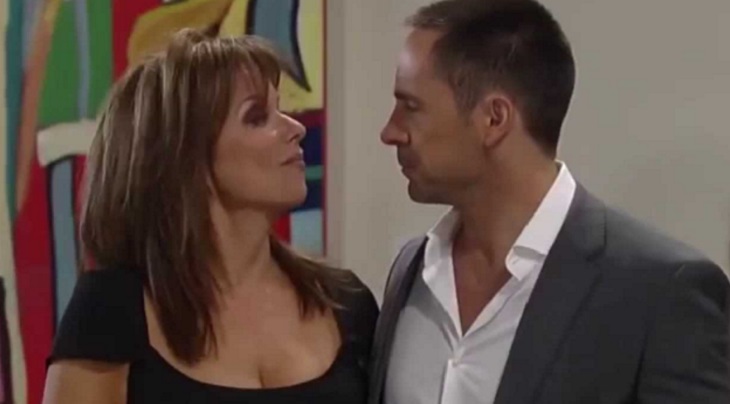 ‘General Hospital’ (GH) spoilers hint that Olivia Falconeri [Lisa LoCicero] may soon prove to be a speed bump in the relationship of Julian Jerome [William deVry] and Alexis Davis [Nancy Lee Grahn]. Could Olivia’s interference ruin the wedding of Julexis? Read on and then vote in our POLL on who Julian should be with…

We’ve seen the longing looks that Olivia has been giving Julian whenever she watches him with Alexis. GH spoilers tease that Olivia will continue down this stalkerish path and will use baby Leo as a tool to get herself closer to Julian and drive Alexis out of the picture.

What’s interesting is, despite his love for Alexis, Julian may be tempted – and it’s all about Leo. Julian has missed out on all the milestones with both of his other kids – Sam Morgan [Kelly Monaco] and Lucas Jones [Ryan Carnes] – and didn’t get to see them grow up.

So it could be very tempting for Julian to want to raise Leo in a two parent home where he won’t miss a moment of his youngest son’s life. The fact is, that’s something Olivia can offer that Alexis cannot. You’ll notice that Olivia acted strangely several times recently.

First there was the Christmas sweater incident where she bought matching winter wear for herself, Leo and Julian. Then there’s the huge portrait of the three of them looking like a little family in their matching sweaters that she put right in the middle of Alexis and Julian’s mantle.

And when Olivia congratulated them on their engagement at the MetroCourt and brought over champagne, she was sure to remind Alexis that it was champagne that landed her and Julian in bed together resulting in their son Leo. That was pretty bitchy. Plus Olivia has been staring incessantly…

But it’s not just Olivia that’s acting off. Remember that Julian invited Olivia to spend Christmas with them without checking with Alexis first, or even informing her? He also didn’t tell Olivia about his engagement with Alexis. Was that just an oversight?

It’s likely that Julian isn’t aware of what he’s doing. He’s developing a relationship with Olivia outside of his family dynamic with Alexis. For Alexis, this might feel like Julian is choosing Olivia over her in some situations, which seems accurate.

It’s like Olivia trumps Alexis in some situations because of the baby. Will Olivia soon leverage this to try and stop Alexis and Julian from marrying? Not only has Julian not ever gotten to see any of his kids grow up, Olivia never had a baby daddy around before.

Olivia kept the secret of Dante Falconeri [Dominic Zamprogna] from Sonny Corinthos [Maurice Benard] and that landed her raising a child as a single mother. Olivia doesn’t want to do the single mom thing again – it’s not easy.

Plus with Julian supposedly out of the mob, it’s not the same deal as it was with Sonny and Dante. She doesn’t have to fear the mob factor. In fact, Julian is rich, sexy, a legitimate businessman – and her baby daddy. Plus, that night they shared may have been earth shattering for Olivia…

Nancy Lee Grahn revealed on Twitter that she had a wedding dress fitting – but GH spoilers tease that an unexpected wedding guest could mess up the ceremony. Will Olivia be the guest or little Leo? Will Olivia bring Leo to the wedding and make a last-ditch appeal to Julian to be a family with her and their son?

It’s obvious that Olivia is mooning over Julian – but can she make a case strong enough to tear Julian away from the great love he has with Alexis? Or will Olivia’s big move to try and take Julian ruin any chance of peaceful co-parenting? Alexis won’t take this lying down…

What do you think? Should Olivia just suck it up and butt out of Alexis and Julian’s relationship even if she wants Julian with her and Leo? Or does Olivia have the right to fight for Julian so Leo can have a chance at a two parent home?