‘General Hospital’ POLL: Who should Maxie be with? VOTE! 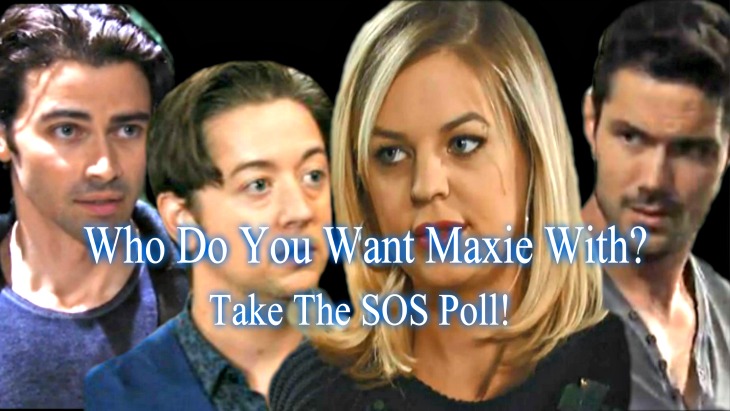 ‘General Hospital’  is revving up to heat up July with a hot, hot, HOT triangle of men and they’re all vying for Fair Maiden Maxie Jones (Kirsten Storms-Barash)’s hand; so to speak. One truly already has that spot sewn up… and that is:

He’s gone so far as to make his intentions very clear to all… he put a ring on Maxie’s finger! True; but, as we all know, some secrets can’t, or won’t, stay hidden. It would appear that the secret from his past is about to pop out of the woodwork and land smack-dab… IN HIS FACE! *Gasp!*

Now we know Nathan has already lied to Maxie by telling her that Claudette (yet to make an appearance on-screen) married him all those years ago just so she could get her green card, but she didn’t really love him. The question in my mind is: Is Nathan still IN love with the faithless Claudette though? Hmm…

Next in line for the Fair Maxi’s hand and heart is our intrepid cyber-geek our hacker extraordinaire: Damian “The Jackal” Millhouse Spinelli (Bradford Anderson). Damian has loved Maxi “Maximista” Jones for a long time… almost since he first came to Port Charles in 2006. He’s given Maxi thrills and spills (Storm Drain episode), excitement and never a dull moment, laughs and tears… but most of all… he gave Maxi their beautiful daughter Georgie (Harper Barash – Kirsten’s real life daughter with now ex-husband Brandon Barash {Johnny Zacchara} ).

We know that Damian now lives in Washington state, with his love-interest, Ellie Trout (Emily Wilson) and takes care of his daughter, Georgie (whom he has legal sole custody of). Does he pine for the fair Maximista? Would he move back to Port Charles in order to be a family with Maxi? Hmm…

Last, but not at all least, in line for the Fair Maxi’s hand is the new ER Dr. The man is a total conundrum! Is he a defrocked Priest who’s on sabbatical from his Church? If so, why did he leave his church? Or… is he an ER Doctor who also just happens to be a very skilled surgeon? Maxi has a habit of almost always catching the good doctor in a state of undress as he’s standing at his locker about to get into a fresh uniform after a shower. A few times Maxi has sought his council, and he’s been almost reluctant to advise her where it concerns her and Det. West. Why is that? Why is he shying away from helping Maxi?

Why is he so leery of Nathan? Is there some prior connection? Maxi can’t help but notice how Dr. Munro almost always seems to avoid contact with Nathan, and she’s beginning to become increasingly curious.

So “GH” Fans vote in the Soap Opera Spy poll below and let us know who you want Maxie with: Nathan; Damian or Griffin?