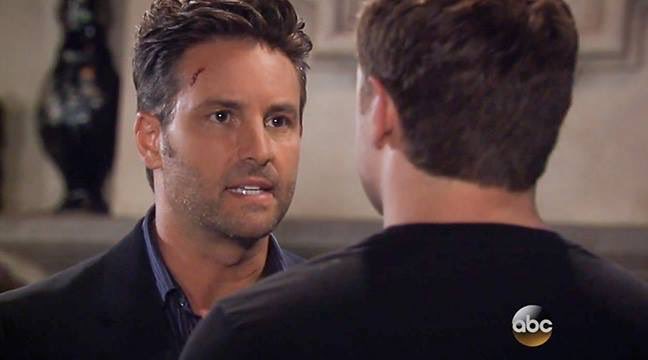 As “General Hospital” fans saw these past couple days, Nikolas Cassadine has seemingly fallen to his death, yet again, by falling out of a high storey window into the darkness below. What a dramatic way for Nick Stabile to end his run as the Cassadine Prince!! And what a beautiful reign it was! It was nice to see the heroic side of Nikolas too, as his fall was the result of him saving Ava Jerome (Maura West) from being shot by his deranged Uncle Valentin Cassadine.

Yes, you got that right, Nick Stabile has finished his short-term “General Hospital” run, filling in for Daytime Emmy winner, Tyler Christopher who was on personal leave from the show. There has been no official return date as to when “General Hospital” Tyler will be coming back onscreen to a role he has played for over 20 years. Tyler won his first Day time Emmy ever in 2016, for Outstanding Lead Actor in a Drama Series!

For long time fans, you might remember the memorable storyline when Tyler arrived in Port Charles in 2004 as Connor Bishop. After his wife was murdered, he came to avenge her death to hurt the man who killed her, Nikolas Cassadine (also portrayed by Tyler), by planning to kill Nikolas’ wife, Emily Quartermaine (Natalia Livingston).

He kidnapped Emily who told him his wife, Mary would not want him to do this, released her and then blackmailed Nikolas for the “murder” he witnessed Nikolas commit. Nikolas confessed to the crime of pushing Helena off a cliff, but we all know she is a cat that has at least nine lives. Nikolas was sent to prison and Luke Spencer (Anthony Geary) convinced Connor to draw out Helena by pretending he was Nikolas, while Emily taught Connor how to be like Nikolas, he confessed his feelings for Emily. When Emily rejected his advances, he raped her and Emily stabbed him with a screwdriver before shooting him to death.

That is just one of the many intense stories Tyler has portrayed on “GH” besides, pulling double duty as the two characters of Connor and Nikolas, Tyler has played Nikolas Cassadine, off and on since 1996. Five actors have played the role, but Tyler seems to be the most well-known and loved actor in the role.

We, at Soap Opera Spy are sending our best wishes to Nick Stabile and look forward to seeing him appear again on our screens, maybe another time and another place! Stay up to date on storylines, actors and characters. Check in frequently for news and spoilers!