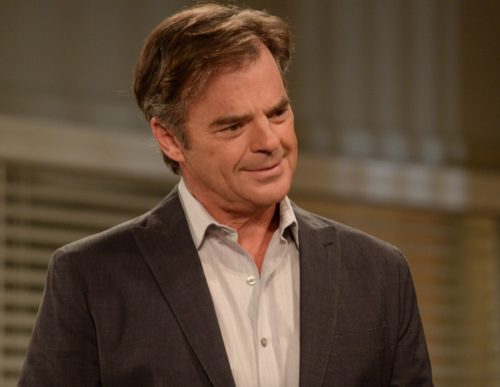 ‘General Hospital’ (GH) spoilers reveal that Ned Ashton [Wally Kurth] is not back just because his mom Tracy Quartermaine [Jane Elliot] is ailing. It looks like Ned will be recurring and will get back into the swing of things in Port Charles as part of several storylines.

This opens up so many possibilities. It was heartbreaking when Ned showed up for a 10 minute cameo solely to dump Olivia Falconeri [Lisa LoCicero]. That situation was made even worse because it was Ned’s idea to lie to Julian Jerome [William deVry] about baby Leo, but then he dumped her over the fib.
When Ned gets back to town, he owes Olivia a major apology. We also have to wonder what Ned will think of his pal Alexis Davis [Nancy Lee Grahn] being married to the cad that knocked up Olivia in a one-night stand. Ned is no fan of Julian’s!

No doubt Ned will find the whole Olivia-Julian-Alexis thing strange to say the least. We know that Olivia needs some love in her life, so we’ve got fingers crossed that she and Ned might get romantic again. But there are more issues for Ned to address in Port Charles beyond his former-GF.

GH spoilers reveal that Tracy will unleash a “secret weapon” in the Quartermaine lawsuit against Nikolas Cassadine [Tyler Christopher]. Is Ned the weapon? It seems likely. Ned had 11.5% of ELQ and his daughter Brook Lynn had 6% of the company – before Nik played dirty.

Both sacrificed their shares to keep baby Leo’s parentage a secret. Franco [Roger Howarth] was in the mix for a while and also blackmailed Ned over the baby secret but, ultimately, that 17.5% ended up in Nikolas’ hands.

If Ned testifies in the case that Nik blackmailed those shares away from him and his daughter that should land them back in Quartermaine hands and could see Nikolas ousted from the ELQ CEO seat. This would be unwelcome news for the Prince.

You’ll recall he was just cut out of Helena’s inheritance so he’s not as rich as he thought and mentioned to Hayden that ELQ was enough for them. He told his dead granny’s video image, “I don’t need your money anyway.” But he might soon.

In addition to the ELQ lawsuit, Ned needs to spend time with his half-brother Dillon Quartermaine [Robert P Watkins]. It’s been a while since the bros have hung out. So there’s plenty of storyline prospects for Ned with the Q family concerns, the ELQ lawsuit and, of course, romance.

We can’t wait to see Wally Kurth return in late March and are glad he’s going to be time sharing between ‘Days of Our Lives’ and ‘General Hospital’ so that fans of both soaps get to enjoy him. What do you think GH fans? Are you excited about Kurth’s return as Ned?

Share your comments below and come back to Soap Opera Spy often for more ‘General Hospital’ spoilers and news.

‘The Bold and the Beautiful’ POLL: Vote for Your Favorite “B&B” Performer of the Week!