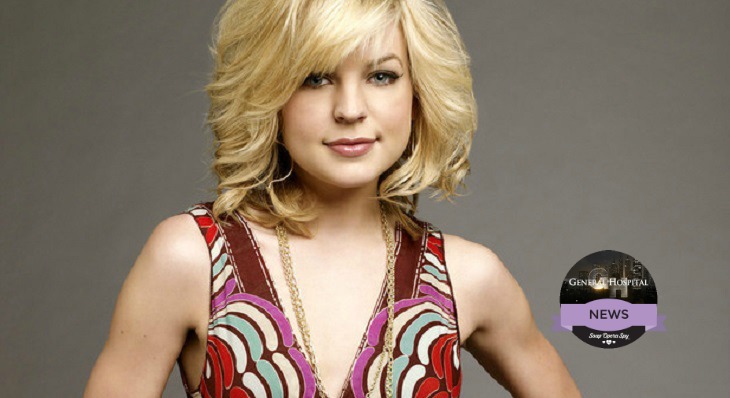 General Hospital’s fan favorite, Kirsten Storms, (Maxie Jones) returns today on screen.  When the news first came out at the end of May, that Kirsten would be on leave, she took to Twitter to thank fans for all their love and support, explaining that she was on a break due to some skin issues and that it was becoming too hard for GH to coverup. She even gave a shout out to her replacement, Molly Burnett, saying she looked forward to seeing Molly on screen while she took time to heal.

Kirsten opened up and explained that she needed to take a temporary leave because she was experiencing skin breakouts from all the stress she was dealing with. In the interview with Soap Opera Digest, the GH star said ”I don’t think it was something that was in anybody’s control because my skin had just gotten to a point where it was telling me and my body that I needed to take a break.”

Kirsten was also dealing with her divorce from Brandon Barash (Johnny Zacchara, GH).  They mutually announced in early 2016, that the divorce was amicable and cited irreconcilable differences as the reason.  Brandon and Kirsten share 2 year old daughter named Harper Rose, who also plays the role of Georgie Jones-Spinelli, Maxie and Spinelli’s (Bradford Anderson) daughter on GH.  Kirsten realized that she was not giving herself enough time to process everything that was going on in her personal life, and continued to work a lot.  She claims that within days of being on break, her skin completely cleared up!

Fans of Kirsten Storms and of General Hospital might remember that she also took time off in 2012 due to endometriosis; her onscreen replacement at that time was Jen Lilley (Theresa Donovan, Days of Our Lives).

Who is looking forward to seeing Kirsten Storms back in the role of Maxie Jones?  She is a great actress and in the middle of a huge storyline involving her fiancé Nathan West (Ryan Paevey) and his ex-wife, Claudette “CJ” Boland (Bree Williamson).

Remember to check Soap Opera Spy often for updates on this story, news and spoilers!